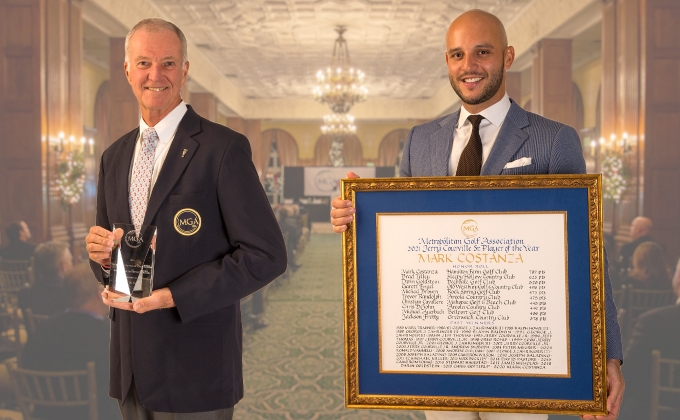 RYE, N.Y. (December 2, 2021) -- The MGA's 124th Annual Meeting and Dinner celebrated the 2021 season Wednesday evening at Westchester Country Club, as former MGA President Al Small and Mark Costanza of Hamilton Farm were honored for receiving this year's Distinguished Service Award and MGA Jerry Courville Sr. Player of the Year Award, respectively. The evening also featured a special conversation with PGA of America CEO Seth Waugh during the meeting portion and prior to dinner, the unveiling of Leighton Calkins, Robert Tyre Jones, Jr., Maureen Orcutt, and Donald Ross as 2021 inductees to the MGA Honors Presented by Stifel.

'Big Al' Small joined the MGA Junior Committee in 2002, quickly joined the Executive Committee the following year and took on a leadership role in 2005 as Secretary/Treasurer. Small was hands-on in his leadership, making time to attend educational seminars, youth clinics, junior competitions, fundraisers, and other special events. He became President at the 2008 Annual Meeting and oversaw iniatives such as the launch of a new MGA website, creation of a public golf membership campaign and expansion of MGA headquarters, Golf Central. Small was also instrumental in the expansion of the MGA Foundation's GOLFWORKS program.

On the course, Small owns an impressive competitive record, including wins in the MGA Senior Amateur when he was president (2009) and at his longtime home club of Fairmount (2017). He played on multiple MGA International teams, finished on the MGA Player of the Year Honor Roll seven times from 1989-2006, and has qualified for 23 USGA events ranging from the U.S. Amateur to the U.S. Senior Open. He was the first – and remains the only – player in New Jersey State Golf Association history to win the NJSGA Amateur, Mid-Amateur, and Senior Amateur; the 2004 New Jersey Player of the Year is a member of the 2020 NJSGA Hall of Fame class.

In addition to running his own electrical contracting business, S&R Electric, raising a family, and competing, Small found time to serve as the head coach for the Seton Hall University men’s golf team from 1990 to 1996. The Pirates won their first Big East Men’s Golf Championship in 1992 under Small’s leadership and he returned as an assistant coach from 2011 to 2014.

During his acceptance speech, Small recounted sneaking through a fence as a kid to play the game. Looking back, Small sees the opening in the fence as what introduced him to golf and spurred his lifelong passion for the game and the relationships that came through it.

Costanza played to a consistently high level throughout the 2021 season, becoming the 8th player to win the MGA Jerry Courville Sr. Player of the Year outright in back-to-back seasons. Costanza finished in the top-10 in both the 66th Ike Championship and 106th Met Open Championship Presented by Callaway, while also advancing to the quarterfinal round of the 119th Met Amateur Championship. His run to the final of the 40th U.S. Mid-Amateur Championship at the end of September locked up his position atop the year-long points race.

To open the dinner MGA President Andrew Stock introduced a video looking toward the MGA's celebration of its 125th anniversary in 2022 and the opportunity to accomplish more through the MGA Foundation and its life-changing programs in the years ahead. Shortly after, videos honored each of the 2021 inductees for the MGA Hall of Merit, part of the MGA Honors Presented by Stifel.

Nearly 200 club representatives, committee members, champions, volunteers, members of the local media and representatives from both local and national golf organizations were in attendance at Westchester Country Club, which aside from 2020's virtual meeting and presentation of awards has hosted the event since 1981.

During the evening's opening meeting, department reports detailed another successful year for the MGA both on and off the golf course. Stock, of Metedeconk National, was re-elected to a second one-year term as President and will continue to serve alongside Vice President Patrick L. Donnelly of Garden City Country Club, Treasurer Ned Zachar of GlenArbor, and Secretary Gregg Angelillo of Baltusrol. Tracy Pester of Morris County was introduced as a newly elected member of the Executive Committee, while Chris Robinson of Sleepy Hollow joined the MGA Foundation's Board of Directors as an at-large member.

Though busy with the end of the semester at Richmond University and not present for the evening, Cole Ekert of Chatham, N.J., was recognized as the recipient of the 2021 MGA Junior Player of the Year Award, Presented by Callaway. Wendy Dominick was surprised with the honor of receiving the Jerry Mahoney Award, given to the Rules and Competitions Committee's Volunteer of the Year.

Attendees also heard from PGA of America CEO Seth Waugh, who joined MGA Director of Communications Helen Farrelly for a conversation on where golf stands today. Waugh discussed the work the PGA of America undertook in helping keep golf possible through the pandemic and the ensuing boom that the sport has experienced, ways in which the game can continue to grow, and thoughts on the 2025 Ryder Cup at Bethpage State Park's Black Course.