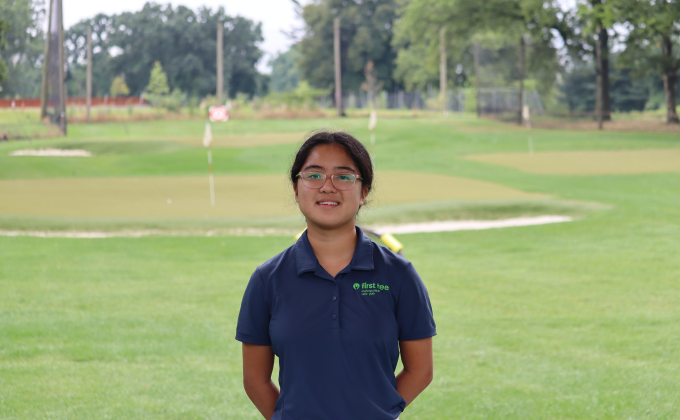 ELMSFORD, N.Y. (January 20, 2023) – For many years now, the MGA and First Tee of Metropolitan New York have partnered through the GOLFWORKS program to help offer young men and women employment at the First Tee. Commonly, golfers who started as participants in the First Tee program will then come back to assist as counselors and coaches once they have progressed through the program. Emily Bui, who is 15 years old, completed her first year as an instructor for the First Tee site at Mosholu.

“It was a great experience for me,” said Bui. “I didn’t really know what to expect, but I enjoyed it.”

Though Bui has been part of the First Tee program at Mosholu for seven years, the transition from participant to instructor was and unknown. Still, thanks to her experience with how the First Tee is run and also thanks to some veteran instructors, after her first year Bui says she learned a lot.

“I knew what would be taught and what the First Tee is about, but it’s different teaching it vs. being taught things. I had a lot of help from some of the senior instructors and that was big for my transition.”

Bui, like so many at the First Tee, went from not knowing much about golf to loving the sport. Emily had a small pool of knowledge, but not much else. That changed quickly, as the First Tee provided a base for Bui to build upon.

“I caught on pretty quickly and definitely improved a lot,” said Bui. “Golf isn’t an easy sport so through the seven years I was always improving and continuing to learn.”

After seven years, golf is now one of the focal points of Bui’s life. She not only plays but teaches at the First Tee as well. And while golf is a large part of the First Tee curriculum, it isn’t necessarily the most important thing that is taught at Mosholu and other sites.

“What I liked about the First Tee when I started was that they focused on lots of things other than golf,” said Bui. “We focused on core principles that relate to golf but also relate to life. I think that’s one of the coolest things about the program is it’s a lot more than just golf.”

Apart from teaching life skills, the First Tee also makes golf fun for those that don’t know much about the game.

“We play a lot of games with the kids and I think that helps keep things fun and easy,” said Bui. “No day is ever the same and so everyone always looks forward to what’s going to happen next.”

While Bui has started instructing at the First Tee, she still actively plays and continues to hone her game. She even mentioned wanting to play golf in college if she had the opportunity. For now she plays in junior leagues in the area, competing as much as possible.

In addition, Bui also runs track and loves to read. She continues to grow outside of the game as well and though it is early in the college process, she says that psychology could be an area of interest she pursues in the future.

For Bui, the next few years will be some of the best of her life, according to her. She says she can’t wait to continue and get better at golf, while also becoming a better instructor.

“I know I still have a lot to learn,” said Bui. “My experience with the program has been great so far and I want to be able to share my knowledge with other kids who are getting into the game.”

Like many GOLFWORKS interns at the First Tee, Bui also shows a want to share her knowledge and positive experience with the next generation of golfers. It’s why so many First Tee members turn to instructing when they can, so they can continue to spread their love for the game, much like Bui has started to do at Mosholu.