Summers' Day at The Tuxedo Club

Summers' Day at The Tuxedo Club 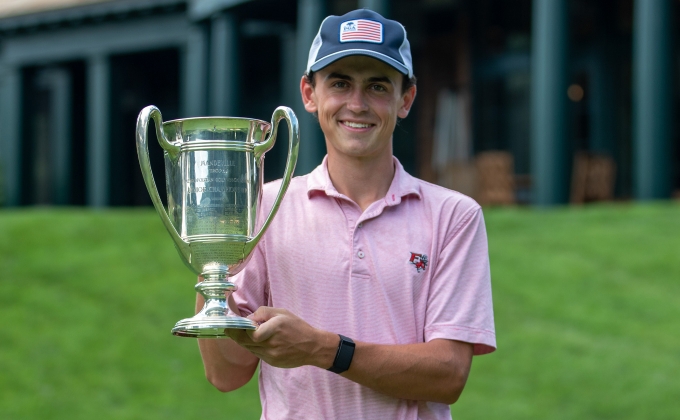 TUXEDO PARK, N.Y. (July 14, 2021) – Colin Summers of Westfield, N.J., ended the final match of the 104th Met Junior Championship Sponsored by MetLife in a familiar place, the 16th green at The Tuxedo Club. Summers defeated John Hiller of New York City, 4 and 2, in the championship match to claim his first MGA title. The 17-year-old won all four of his matches, from the Round of 16 through the final, on hole 16.

“I’m sort of at a loss for words right now,” said Summers. “It was a grind the last three days and I’m just very happy to be able to hold the trophy.”

The final match started off slowly for both Hiller and Summers, with neither making much of a move. Through eight holes the match remained tied. On the ninth hole, Summers made the first move, draining a birdie from just outside 10 feet to take a 1-up lead into the turn. He quickly seized control of the match on the par-5 10th, making birdie to Hiller’s par to move 2-up.

“Early on, I didn’t really have any great numbers from the fairway,” said Summers. “Then on [Nos. 9 and 10] I had numbers that I was super comfortable with. They were both three-quarter wedge shots that I could flight super easily, and I stuck them pretty close with minimal spin—which you had to do because it was pretty soft. I had solid numbers on those holes and ended up taking the opportunities.”

Summers continued to put the pedal down, winning Nos. 11 and 12 to take a commanding 4-up lead going into the 13th hole. From there it was a matter of staying calm and consistent, as he had been all tournament.

“Today I got off to early leads,” said Summers, who’s headed to Fairfield University in the fall. “So, with those leads I just kept it in play and tried to find the middle of the green and two putt and make my opponent make the mistakes.”

After an incredible up and down from Hiller on the par-4 14th to win the hole, the two finalists tied the par-3 15th hole to push the match to 16. Both players hit the fairway, but Hiller missed the green while Summer’s approach crept to within six feet. Summers wouldn’t have to hit another shot as Hiller conceded birdie and the championship after his par putt slid by.

“I’ll be smiling ear-to-ear for probably the next couple years, honestly,” said Summers. “Just to have my name on that trophy with 103 other champions is pretty special.”

Hiller had to grind his way through match play, making clutch putts throughout the tournament. He made the final day with a 2-up win over Reed Greyserman of Short Hills, N.J. In the semifinals, he drained a birdie on the par-5 18th to beat Owen Walsh of Katonah, N.Y., 1-up. Summers route was slightly more comfortable. He took down Cameron Besaw of New Canaan, Conn., in the quarterfinals 3 and 2 and beat Charlie Berridge of Scarsdale, N.Y., 3 and 2 as well in his Wednesday morning semifinal.

With the win, Summers not only gets his name etched on the Met Junior trophy, but he also gets the chance to compete in the 119th Met Amateur Championship at Plainfield Country Club, a place that, as a member, he knows very well.

“It’s good to know that I get a spot and I’m looking forward to it—I have some course knowledge there,” said Summers.

After a successful championship at The Tuxedo Club, the Met Junior Championship sponsored by MetLife will head to Long Island in 2022 with St. George’s Golf and Country Club hosting the 105th iteration of the event.

Competitors enjoyed competing at The Tuxedo Club, a founding member of the MGA that this week set a record for hosting its ninth different MGA event. Despite heavy rains both Sunday night and again Monday evening, the course has been in fantastic condition and tested players from tee to green, setting a premium on positioning.

The MGA Foundation conducts the Met Junior as part of its extensive youth programming, which is supported by MetLife. MetLife’s particular support of the MGA Foundation is a testament to the company’s longstanding mission of giving back and allows the MGA Foundation to continue instilling the values and traditions of golf in the next generation of golfers through a variety of innovative programs and junior championships.