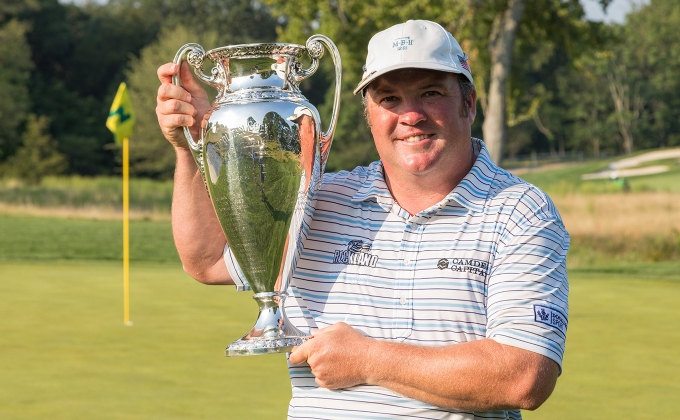 CROTON-ON-HUDSON, N.Y. (August 26, 2021) -- With temperatures nearing 100 degrees at Hudson National Golf Club, Andrew Svoboda of Engineers kept cool down the stretch to secure a two-stroke win in the 106th Met Open Championship Presented by Callaway. The now three-time Met Open champion used birdies on Nos. 15 and 16 to put space between himself and runner-up Tom Lovelady of Silo Ridge. Svoboda's win gives him victories in two of the last four Met Opens, with his last victory coming in 2018 at Wykagyl.

"The win here is incredible because everyone knows Hudson National," said Svoboda. "This is a bigger course, a championship course and it's known for being very tough, so it's a prestigious win."

Svoboda finished under par each of the three rounds at Hudson National. With his final round 2-under 68, his three-day total of 200 matched the lowest 54-hole score in Met Open history, tying Matt Dobyns' mark in the 104th Met Open at Piping Rock. Svoboda was surgical in the way he attacked the course, only carding four bogeys in 54 holes.

"I played really well, I didn't make a lot of mistakes," said Svoboda. "I hit a lot of fairways and a lot of greens and made a handful of birdies every day, which helps. You have to drive the ball well and I think that's why I did well this week."

Svoboda began the day with a two-stroke lead over David Pastore of Golf Performance Center. Pastore faltered early and never clawed his way back. He finished third, firing an even-par 70 during the final round. Svoboda's main challenge came from Lovelady, who took a brief lead after birdies on 11, 12 and 14. However, a bogey on 15 dropped him back to 8-under and Svoboda's clutch putting sealed the deal.

"I would have loved to win," said Lovelady. "For someone to shoot 10-under on this course, they deserve to win. I'm very happy with how I played and I just made a few bogeys on the back that hurt me."

Jack Wall of Manasquan River made a charge early in his round, reaching 7-under and within two of the lead before fading late. Still, a solid three days and a 4-under total earned him low amateur honors at the Met Open for the second time in his career. Wall was also the low amateur and runner-up when Svoboda won at Wykagyl in 2018. This year, Wall finished solo fourth, was one of 11 players to finish the week under par and one of just three players to submit three scores in the 60s.

Svoboda, whose first professional event was the 2004 Met Open at Hudson National, said that ball striking was the key to his success during the week.

"I was striking the ball great all week," said Svoboda. "I didn't make too many mistakes and I used the softer conditions to really hit the ball well. I want to thank my caddie Andre as well because he gave me a lot of good reads all week."

Svoboda didn't know where he stood heading into the 15th, when his caddie informed him he was one behind Lovelady.

"He told me I was one behind and that we had to make birdie on [15]," said Svoboda. "I was able to make that putt and then made a really good birdie on 16 as well."

The par-3 16th hole, Hudson National's signature hole, played every bit of 250 yards on the final day of the tournament. Svoboda used a hybrid to knock his tee shot inside 10 feet. He then converted on the birdie for what proved to be the cushion he needed.

"I made a really good up and down on 18," said Svoboda. "My caddie made me think I needed a par [to win] so it was big to see that drop."

Though Svoboda only needed a bogey to win, his par at the last capped an incredible week and his third Met Open Championship. Svoboda joins Darrell Kestner, Wes Ellis, Macdonald Smith, Mark Brown, Walter Hagen and Alex Smith (4) as the only three-time champions in the 106-year history of the Met Open. Svoboda's first Met Open victory came as an amateur at Metedeconk in 2003.

The Met Open will head to Bethpage Black next year for the 107th playing. The top 25 competitors from Hudson National are exempt into next year's field. The event was last hosted at Bethpage in 2010 when Bob Rittberger won in a playoff over Danny Balin. It will be the third time Bethpage has hosted the event.

Hudson National once again served as an incredible championship host, testing the field while also leaving them raving about the conditions and the spectacular layout and scenery. Despite more than five inches of rain early in the week, the grounds crew's extra efforts delivered superb conditions.