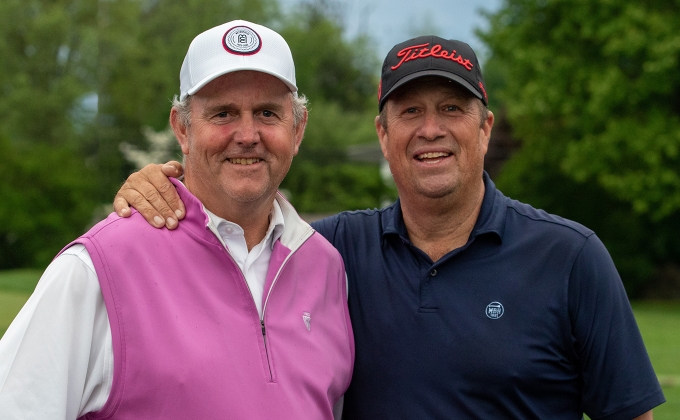 UPDATE: (May 17, 2022) -- The playoff for the final advancing position to the 42nd U.S. Senior Open Championship from Sunningdale concluded on Tuesday morning, with Mike Meehan making a par 4 on the opening hole. Brian Gaffney takes the first alternate position.

SCARSDALE, N.Y. (May 16, 2022) -- One ticket to Saucon Valley Country Club for the 42nd U.S. Senior Open Championship remains to be punched, as two suspensions of play due to lightning extended play Monday in the sectional qualifier at Sunningdale Country Club. Craig Thomas of White Plains, N.Y., Bill Van Orman of Watkinsville, Georgia, and Ned Zachar of Norwalk, Conn., earned their spots in regulation, but a 2-for-1 playoff set to resume Tuesday at 7:30 a.m. remains between Brian Gaffney of Essex Fells, N.J., and Mike Meehan of Bayville, N.Y., to decide the final player to advance.

"I didn't hit anything really great, but I was just kind of scraping it around in the right spots," said Thomas, who carded a medalist-earning 3-under 67. A little local knowledge and memorable moments at the course helped Thomas to the low round, as he carded just one bogey on the day. "I have played here quite a few times and am familiar with the golf course," continued the Metropolis professional. "I really like the course, I've had some success here. I won the Met Senior Open here when I turned 50, so it's always fun to come back and I couldn't be more excited." Thomas tallied pars on Nos. 2, 7, 8, and 15.

Van Orman played alongside Thomas, making for a familiar day of competition between old friends. "I was hitting it well and it was a comfortable pairing," said the Meadow Brook professional following his 2-under 68. "We've been playing against each other for 45 years now. I didn't want to spend eight hours with him today, but it was good playing with a friend and I was hitting it good, so it's one of those things you try to not let bother you," said Van Orman, commenting on the two delays due to lightning, which both lasted around 40 minutes. "It doesn't bother you when you're playing well, when you're playing poorly it bothers you."

Van Orman carded an eagle on the par-5 seventh hole, and added in four birdies and four bogeys for his 68. Now, he's looking forward to his first start in a Senior Open. "I've played in two regular Opens, and haven't even sniffed a Senior Open," he said. "I'm 58, so I've tried at least six-seven times. It's not too far away, which is nice, and I hear it's an unbelievable golf course, so I'm looking forward to it."

Zachar also posted 2-under 68, doing so in the morning wave before threatening weather blew through. Zachar, who will be making his second U.S. Senior Open appearance (2018), birdied two of his last three holes to advance. "I had a very good feeling coming into the day about the golf course because I came out here on Wednesday to look around and I loved it," said Zachar. Now, he'll return to Saucon Valley where he has good memories from the 2014 U.S. Mid-Amateur, in which he advanced to the Round of 16. "I played the Mid-Am at Saucon Valley in 2014, and I played well, so I have a very soft spot in my heart for Saucon Valley," he said.

Gaffney and Meehan were joined by Darrell Kestner of Glen Cove, N.Y., and Heath Wassem of Mount Kisco, N.Y., with rounds of even-par 70 to begin what was a 4-for-1 playoff for the final slot. Kestner and Wassem made bogey fives on Sunningdale's opener, but Kestner elected not to return Tuesday morning for the additional playoff, making Wassem the second alternate.