Tilley, Costanza, Herzig and Gerbavsits Advance To Met Am Semis

Tilley, Costanza, Herzig and Gerbavsits Advance To Met Am Semis 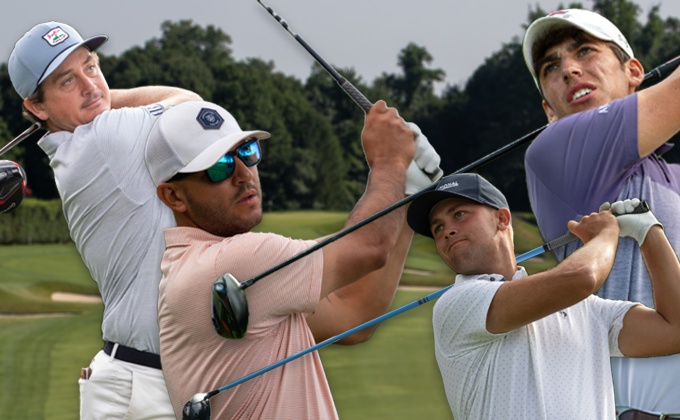 SCARSDALE, N.Y. (August 5, 2022) – After two rounds of match play, just four golfers remain in the 120th Met Amateur Championship at Fenway Golf Club. Brad Tilley of Sleepy Hollow, Mark Costanza of Hamilton Farm, Robbie Herzig of Old Oaks and Tyler Gerbavsits of Huntington Crescent punched their tickets to Saturday's semifinals with wins in the Round of 16 and Quarterfinals.

On another tough day at Fenway, most matches came down to the wire, with three requiring extra holes. Fenway’s challenging greens continued to put a premium on limiting mistakes and hitting the smart shots.

Tilley used a strong performance in the morning to win 3 and 2 over Erik Stauderman of Casperkill. This year's Mittelmark Invitational champion at Fenway made three birdies on the front side and never trailed in the match, closing things out on the 16th hole with a par. In the afternoon Tilley was pushed to the brink by Matt Lowe of Bethpage, but was able to win the 18th hole and secure a 1-up win in the match.

“This morning I just played really well,” said Tilley. “[Stauderman] probably would have beaten most guys who played this morning, so I was really happy with my play. The second match was back and forth all day. There were some crazy bounces coming in and I was just happy to be on the right side of it.”

Both of Costanza’s matches finished on the 18th or later. In the morning he defeated Johnny Bush of Plainfield 1-up on the final hole. In the afternoon, Costanza and Tom McCarthy of Essex County traded birdies for most of the round. A clutch par on the 18th from Costanza forced extra holes before another par on the first playoff hole closed the deal for the two-time reigning MGA Player of the Year.

“It was one of the better matches I’ve played in a long time,” said Costanza after his quarterfinal match. “Tom played great, and it really could have gone either way. It felt like a situation where we were just waiting for the first guy to blink.”

Costanza has made it to match play in three straight Met Amateurs, but this is the furthest he has made it in the event.

Herzig was also tested on extra holes. For him, it was during the morning Round of 16 against Christian Cavaliere of Mahopac. After Cavaliere clawed back from four down with four to play, Herzig punched his ticket to the Quarterfinal round with a par on the 20th hole. In his second match of the day, against Lukas Clark of Galloway National, Herzig never trailed after the fifth hole. Par was enough to seal the deal on the 17th hole and punch Herzig’s ticket to the semifinals.

“This morning I was a little nervous heading into extra holes because he had all the momentum,” said Herzig. “When I started this afternoon, I was confident. I’ve been driving it well all week and just being patient around the greens.”

Gerbavsits led for most of the morning round before Ben Loomis of Winged Foot made a late charge. Gerbavsits was able to survive, winning the 18th hole and the match 2-up. In his Quarterfinal match against Luke Sample of Old Oaks, Gerbavsits went up early and never looked back. A closing flurry on the 13th and 14th gave him a decisive 5-and-4 win over Sample.

“It was big to get up early,” said Gerbavsits. “Knowing how good of a player [Luke] is, to get off to that good start was key. I never let him get too close in the match and when I had the putt to win it on 14, I knew I had to take advantage and I did.”

Tilley is the only semifinalist who has made it this far in the tournament, when he was beaten in 2003 by eventual champion Michael Stamberger. Costanza has made match play each of the last three years but was bounced in the Quarterfinals last year and the Round of 16 in 2020.

The first match will tee off at 7:30 a.m. Saturday with only the semifinals being contested. The finals will be played over 36 holes on Sunday.