Tilley, Herzig to Square Off in Met Am Finals

Tilley, Herzig to Square Off in Met Am Finals 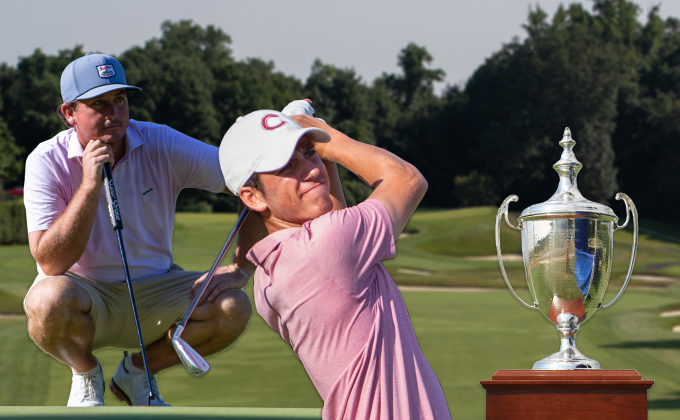 SCARSDALE, N.Y. (August 6, 2022) – Brad Tilley of Sleepy Hollow and Robbie Herzig of Old Oaks punched their tickets to the final of the 120th Met Amateur Championship at Fenway Golf Club after semifinal victories on Saturday morning. Herzig closed out Tyler Gerbavsits of Huntington Crescent 5 and 4, while Tilley took his match against Mark Costanza of Hamilton Farm, 2 up. Both Tilley and Herzig are first time finalists in the Met Am.

“It’s a great feeling,” said Herzig, a rising sophomore at Colgate. “Coming into this week I was definitely confident in myself, but I’m not sure if I expected to be playing on Sunday.”

“Going into 18, I knew I had to halve the hole to win the match, but the way the match was going my mentality was to make a birdie to win,” said the 39-year-old Tilley. “Mark is such a good player and he can make birdies so I was expecting to have to make one to win.”

Tilley, the 2022 Westchester Open and Mittlemark Invitational champion, went back and forth with Costanza early in the match. First it was Tilley with a leg up, then the two-time reigning MGA Player of the Year Costanza pushed back.

“I hit a really good shot on one to go 1 up there and then made an unbelievable birdie on two to go 2 up,” said Tilley. “Knowing Mark I knew no lead was safe so I was a little disappointed I didn’t convert any birdies on three or four. I knew at that point it was going to take under-par golf to win holes so I just buckled up and did the best I could.”

After a tie on the fourth hole, Costanza won three of the next four holes to jump into the lead. He held a 1-up advantage into the 11th hole, where Tilley got up and down from a sand divot short of the green. After that, momentum flipped in his favor once again, as Tilley won the next two holes to regain a 1-up lead.

“I don’t know about turning point, but I definitely gained some momentum from that putt going in,” said Tilley. “He left the door open a bit on 12 and 13 and I was able to make a few putts and take advantage.”

Tilley stayed solid through the next stretch of holes and after both he and Coztanza ended up close to the green in two on the 18th, Costanza conceded the hole when he failed to get up and down from a challenging sidehill, downhill lie just outside of a bunker.

In the second semifinal match, Herzig took a similar path to Tilley’s, going 2 up through two holes with a pair of birdies.

“I knew going into the day the pins would be pretty tucked,” said Herzig. “I just aimed for the middle of the greens. I got an 18-footer to fall on the first and hit it pretty close on the second. That felt good to be comfortable quick.”

After losing the third hole, Herzig won Nos. 5 and 6 to take a commanding three-hole lead, one he wouldn’t relinquish.

“He’s such a good competitor, so I just wanted to make sure to keep him on his toes and not let him get too close,” said Herzig. “He had some issues off the tee on five and then I made a nice birdie on six. My goal the whole time was to just keep the pressure on.”

Herzig also won the ninth hole, putting himself 4 up at the turn. A win on the par-4 10th gave him a commanding 5-up lead and after a few holes tied with pars, he closed out the match on the 14th hole with a conceded bogey.

“It feels really good,” said Herzig. “Especially going back to Thursday morning, I hit a duck hook off the first tee and was five-over through seven holes. I battled my way back and I’m playing on Sunday and that feels really good.”

Tilley has come the closest to the Met Amateur finals of the two, losing in the 2003 semifinals, while Herzig made match play in the event for the first time this year.