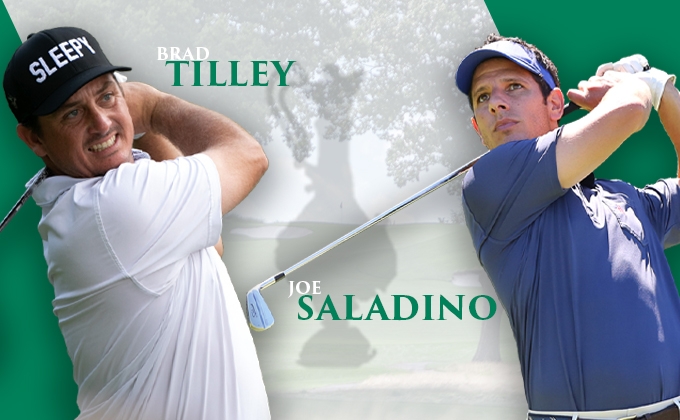 ELMSFORD, N.Y. (August 29, 2019) – The MGA is pleased to announced Brad Tilley of Sleepy Hollow and Joe Saladino of Huntington as the MGA's final two team members for the 15th Governor Hugh L. Carey Challenge Cup matches. The biennial matches between the MGA and the Golfing Union of Ireland serve as a highlight to the fall schedule, taking place October 22-23 at Arcola Country Club in Paramus, N.J.

Tilley and Saladino round out the six-man team, joining Darin Goldstein of Deepdale, Thomas La Morte of Knickerbocker, James Nicholas of Westchester, and Trevor Randolph of Arcola.

Tilley is appearing on his second consecutive MGA International Team after competing in the Frech-American Challenge last fall. The 36-year-old has been a constant on Met Area leader boards since rejoining the amateur ranks in 2017, when he was runner-up in the Westchester Amateur and made a run to the quarterfinal round of the U.S. Mid-Amateur after finishing as stroke play medalist. Tilley finished in the MGA's Player of the Year Honor Roll in 2018 and this year competed in match play for both the Westchester Amateur and Met Amateur.

Saladino is a veteran of MGA International Teams, having competed five times in both the Carey Cup and French-American Challenge, last representing the MGA in 2015 against the GUI. While Saladino's competitive schedule has been limited in recent years, 2019 has marked a resurgence for his game as he began the year with a victory in the Havemeyer Invitational and made a run to the semifinals of the Travis Invitational. Most recently, Saladino made the cut at the 104th Met Open at Piping Rock Club.

The Carey Cup – which originated as the Metedeconk International Challenge Cup – was first played in 1990. The teams played once again in Ireland in 1992 but did not meet in 1994. In 1996, the matches were conducted again thanks to an effort spearheaded by the late Governor Hugh L. Carey, who envisioned the matches as an opportunity to foster sportsmanship and goodwill between the countries. Ever since, the matches have been played in his honor with a spirit of camaraderie and competition.

The event officially kicks off on Monday, October 21 with an "Am-Am," in which each of the GUI and MGA players will be paired with three amateurs in a best ball competition.