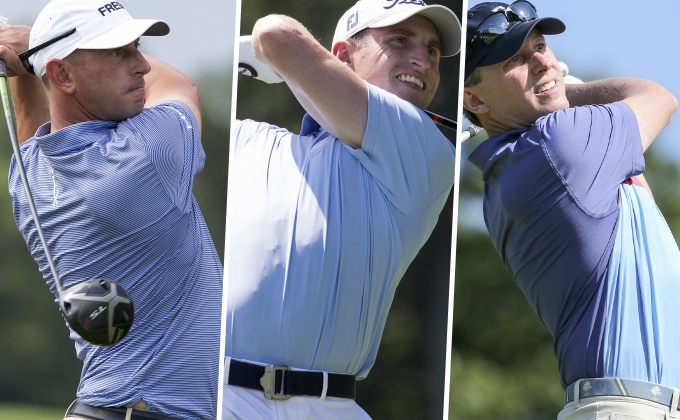 UPDATE (September 30) -- An up-and-down birdie on the 18th hole from Alex Beach helped spark the U.S. team to a record come-from-behind victory over Great Britain & Ireland in the PGA Cup, Sunday at Omni Barton Creek Resort & Spa in Austin, Texas. After losing seven of eight matches on Saturday, the U.S. squad of PGA Professionals won eight of Sunday's 10 singles matches en route to the 14-12 victory and it's first outright win in the PGA Cup since 2011.

Beach, in his first season at Westchester Country Club, chopped a chip from sidehill rough to within 10 feet on the closing hole with his match standing tied. The PGA Cup rookie drained the birdie look on the par-five finisher, helping the U.S. maintain momentum.

As the U.S. team continued to put Red, White & Blue flags on the scoreboard, the event came down to the final two matches. Jason Caron of Mill River picked up a 3-and-2 victory in his match, giving the U.S. a 13-12 lead overall and igniting even more celebration as the U.S. could feel it's comeback nearing completion. "This morning when I woke up, I had a nice feeling about how I was going to play," said Caron.

Marty Jertson of Phoenix, Ariz., took the deciding match by a 4-and-2 decision, securing the win for the U.S., which now owns an 18-7-4 overall record in the event.

"I think being four points down, some of the players, especially the rookies, might have wondered if we can really come back," said U.S. Captain Derek Sprague. "I told them last night that I believed in them, but I needed them to believe in themselves. And this is what can happen when you believe in yourself."

For the week, Beach and Caron both compiled 2-2 records, including their 1-up foursomes victory on Saturday, which served as the U.S. side's only point for the day. Balin went 0-4 for the week, dropping a pair of close 1-up matches.

The PGA Cup in 2021 returns to Foxhills Resort Club in Ottershaw, Surrey, England.

ELMSFORD, N.Y. (September 25, 2019) -- The Met Area will be well represented this week during the 29th PGA Cup, as Danny Balin of Fresh Meadow, Alex Beach of Westchester, and Jason Caron of Mill River all don the Red, White and Blue in the biennial event that pits PGA Professionals from the U.S. against their Great Britain & Ireland counterparts. Play takes place September 27-29 at Omni Barton Creek Resort & Spa in Austin, Texas.

Balin owns one previous appearance in the PGA Cup, having competed in 2011 at CordeValle in California, where during a four-ball match he made the event's second-ever ace.

The PGA Cup is identical to the Ryder Cup. Play takes place over three days, with the first two days including foursomes (alternate shot) and four-ball, before concluding with singles matches.

The PGA Cup was first played in 1973 at Pinehurst Country Club and was held annually until 1984, when it switched to a biennial event at alternating sites.