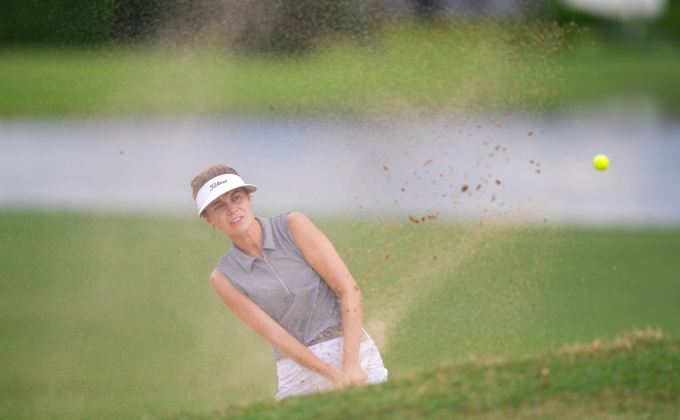 UPDATE (September 22, 2022) -- Aliea Clark of New York, N.Y., put together another incredible run at the U.S. Women's Mid-Amateur, coming up just short in the finals against Krissy Carman of Eugene, Ore. In a tightly contested match, Carman won two of the last four holes to take the match 2 & 1 on the 17th hole.

Clark fought back after a slow start in stroke play to claim the No. 27 seed in match play. She then played near-mistake free golf throughout her match play run. This is the second straight year that Clark has been a finalist at the U.S. Women's Mid-Am, meaning she will once again be exempt into the tournamnet next year.

Ina Kim-Schaad of New York, N.Y., and Talia Campbell of New York both made it to match play this year as well. Campbell exited in the Round of 32, while Kim-Schaad made it as far as the Round of 16 before she was knocked out of the tournament by Clark.

Next year's U.S. Women's Mid-Am will head to Stonewall in Elverson, Pa.

UPDATE (September 21, 2022) -- For a second year in a row, Aliea Clark is back in the U.S. Mid-Amateur Finals. Clark, of New York, N.Y., secured her berth in the 18-hole final with two dramatic wins on Wednesday at Fiddlesticks Country Club in Fort Myers, Fla.

Clark overcame a 1-down deficit going into the 18th hole in her Quarterfinal match, winning the 18th and 19th holes to advance. After a short break she started slow in her semi-final match against Isabella DiLisio of Hatfield, Pa., going 2-down after four holes. Clark clawed back quickly, winning the fifth, sixth and seventh holes to take a 1-up lead.

After DiLisio won the 11th, Clark rebounded to win the 14th hole. Halves on the final four holes gave Clark a 1-up win, sending her to the final.

Clark will compete against the No. 5 seed, Krissy Carman of Eugene, Ore., who's playing in her first U.S. Women's Amateur and just second ever USGA championship.

UPDATE (September 21, 2022) -- Aliea Clark advanced to the semifinals for a second straight year at the U.S. Women's Mid-Amateur Championship, doing so in dramatic fashion. Clark made par on the 18th hole to push her match to extra holes before a birdie on the 19th hole secured her victory over Jacqueline Setas.

Clark has a quick turnaround, beginning her semifinal match against Isabella DiLisio of Hatfield, Pa., at 2:45 pm. DiLisio and Clark were the No. 26 and No. 27 seed respectively coming out of stroke play.

UPDATE (September 21, 2022) -- Aliea Clark of New York, N.Y., punched her ticket to the Quarterfinals of the 35th U.S. Women's Mid-Amateur Championship, with a decisive win over Ina Kim-Schaad of New York, N.Y., in the Round of 16. Clark took down the 2019 Women's Mid-Am Champion, 5 & 3. Clark lost the first hole, won two of the next four, and never looked back.

She closed the match out in style, winning four of the last five holes to defeat Kim-Schaad. Much like her Round of 16 match, Clark made just one bogey in the match, with it coming on the first hole. After securing the No. 27 seed in stroke play, Clark will match up against the No. 14 seed Jacqueline Setas of East Lansing, Mich., with their match starting at 9:50 am this morning.

UPDATE (September 20, 2022) -- Two Met Area women have advanced to the Round of 16 at the 35th U.S. Women's Mid-Amateur Championship, but just one will be moving on to the Quarterfinals. Ina Kim-Schaad and Aliea Clark of New York, N.Y., are set to square off in a Round of 16 match, beginning this afternoon (or early Wednesday). Play is currently suspended due to weather at the championship, and the match is one of two that has yet to begin in the Round of 16.

Kim-Schaad, the 2019 U.S. Women's Mid-Am champion, used a dramatic comeback to fuel her berth into the current round. Down one with two to play, she birdied the 17th hole and then made par on the 20th hole of the match to defeat Heather Wall of Lakeland, Fla.

Clark, the 2021 U.S. Women's Mid-Am runner-up carved out a huge lead, going five up after six holes against Lauren Greenlief of Ashburn, Va. Greenlief won a few holes, but Clark stayed consistent, making just one bogey on the match and winning it 3 & 2 on the 16th green.

Kim-Schaad earned the No. 22 seed after rounds of 3-over and 1-over kept her comfortably inside the cut line. She never trailed in her win over Tara Bateman of Phoenix, Ariz., closing things out 3 & 2 on the 16th hole. Clark was 6-over after her first 18 holes, but stormed back during her second round, firing a 1-under 71 to enter match play on a high note. In a back and forth match against Sarah Salvo of Salt Lake City, Utah, Clark saved her best for last again, winning the 15th, 16th and 17th holes to take the match 3 & 1.

Like Kim-Schaad and Clark, Campbell made her best score during the second round of stroke play, using a 2-over 74 to get into the clubhouse with a two-day total of 7-over. The No. 34 seed carried her momentum into match play, cruising to an impressive 6 & 5 victory over Connie Isler of Las Vegas, Nev.

All three women will play in the Round of 32 which tees off tomorrow morning at 7:30 am. The Round of 16 will begin shortly after, with Kim-Schaad and Clark on a collision course if they both win their morning matches.