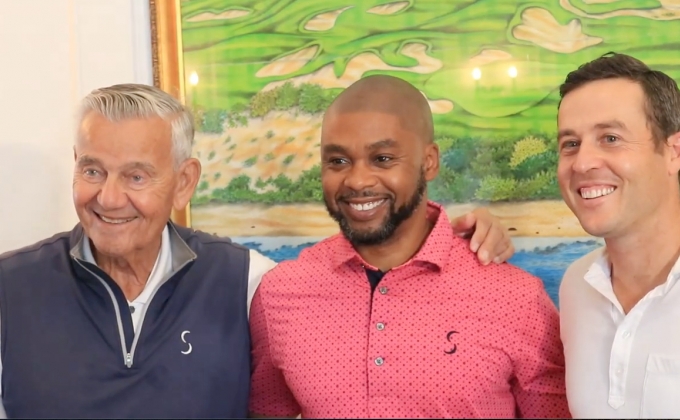 An original Valentino Dixon drawing commissioned by and unveiled at Sebonack Golf Club is more than just one man’s striking interpretation of the Long Island gem.

Look under the bright colors and you can see the painstaking dedication that took Dixon through 27-plus years of wrongful incarceration and the redemptive force of a coincidental connection with golf that set him free.

Michael Pascucci, the Sebonack owner who commissioned the drawing, brought Dixon to Sebonack, which he had never seen, for the June event.  He was joined by Max Adler, the Golf Digest editor who played such a big role in gaining Dixon’s release.

“Number 1, I saw how talented he was.,” Pascucci explained. “And the second thing was, if I can help him get a life back after the bad hand he was dealt, I’m killing two birds with one stone.”

Dixon’s story has received attention, particularly in the golf world, but is otherwise less known. He entered the notorious Attica Correctional Facility in upstate New York at age 21 with a 39-year-to-life sentence on a second-degree murder charge; in order to keep his mind busy and give himself a purpose, he began to sketch landscapes. Feverishly so.

Dixon’s inner-city upbringing in Buffalo didn’t involve golf, so when the prison warden James Conway took an interest in his work and suggested Dixon sketch the iconic 12th hole at Augusta National, they both laughed. But Dixon saw something in the small picture Conway gave him, and when an inmate in the next cell supplied him with a stack of Golf Digests for reference, he began to specialize in golf holes.

At the time, Adler was ghost-writing a monthly feature, “Golf Saved My Life,” and when Dixon came across it, he sent Adler a note and a small drawing. Adler was surprised by the Attica return address and set off to meet him. 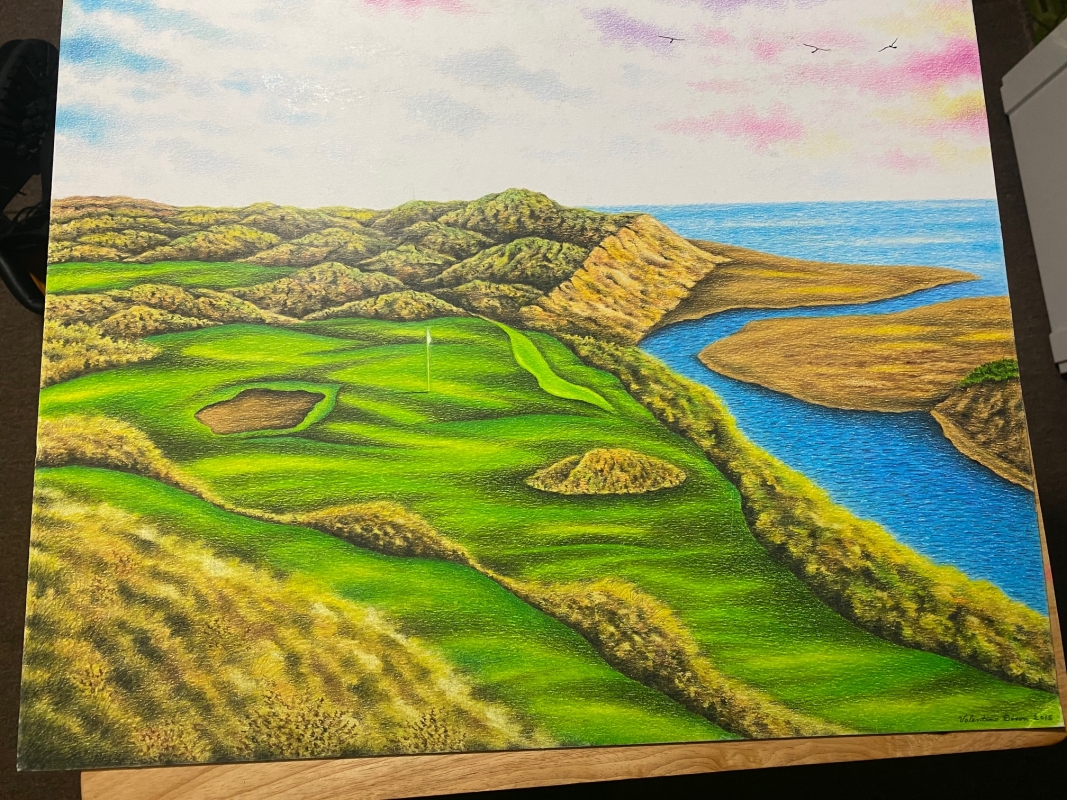 “Attica is about the most horrible place in the world. It’s a 1930s public works prison that looks like a gray fortress. It feels like the DMV at first, but once you go behind the steel gates it’s like a big long hallway with no windows. It’s depressing beyond belief,” Adler recalls. “I didn’t know quite what to think. His story seemed so fantastic. It was weird just being in a prison talking to a guy who’s handcuffed and the guard watching us. Obviously, I’m looking at him from a place of doubt. I assume he’s guilty and this guy’s a murderer. But it really didn’t take that long, a matter of 15 minutes or so of talking to him, that you kind of connected with him in a way you connect with somebody else you befriend in the free world.”

Adler’s 2012 piece led to a “Golf Channel” feature by Jimmy Roberts and eventually a class at Georgetown University Law School took up the case. In 2018, Dixon walked out of Attica a free man -- and not necessarily a bitter one.

“In life you don’t get to decide the obstacles,” he said. “You have to play the hand that’s dealt to you. I see a 10-year-old suffering from cancer, for instance. So I didn’t have time to wallow in pity and give up. I had to get busy living or get busy dying. This is what life is about, to see what you’re made of. How can I survive this and come out on top?  A lot of times when people go through something they don’t know how to respond, so they just give up. My life, I hope, is an example that you can overcome anything. My life is just beginning.”

Dixon developed his style over 10 years out of necessity: Inmates weren’t allowed oil paints or canvas, so he turned to pencil and paper, using a collection of 300 pencils to carefully layer each color with different shades until the drawing resembled a watercolor painting.  Restricted by the size of the boards he could use in his six-by-eight foot cell, he pieced together 20-by-30 boards like a puzzle.

The Sebonack drawing took him three months to complete, all done in his grandmother’s basement.

Dixon admitted that the Sebonack unveiling was “bittersweet” for him. “Michael Pascucci is the only owner who reached out to me since I’ve been on this journey,” he said. “I was just grateful. He’s a wonderful man. His character is all the way up there and to me, character, honor and integrity are important. These are things that I strove to hold onto when I was in prison because I was in a dark place.”

Dixon has received private commissions – including one from Michelle Obama -- and sells his artwork through his website, www.valentinodixon.com,  He has also produced a series of YouTube videos where he teaches art to celebrities. He’s calling it “Drawing with the Stars,” and is hoping a network might pick it up.

“His story is fabulous,” Pascucci said.  “If there’s a golf club and you don’t have a Valentino drawing, you’re missing something.” 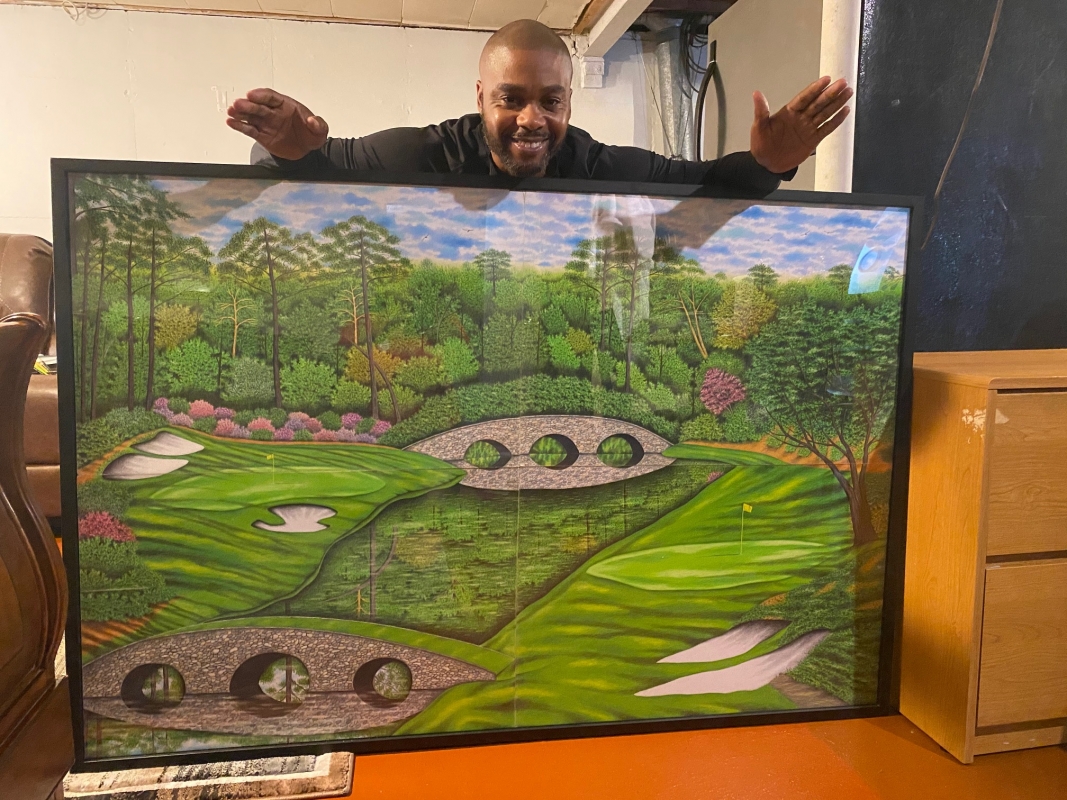