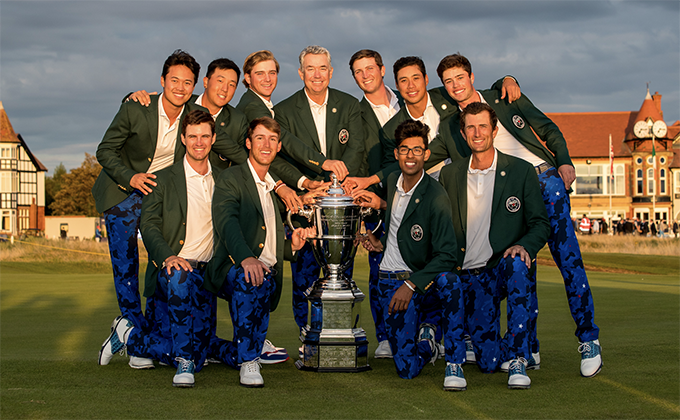 UPDATE (September 8, 2019) – An overwhelming 8-2 edge in the closing singles matches led the United States team to a 15.5 to 10.5 victory in the 47th Walker Cup Match over Great Britain & Ireland, Sunday at Royal Liverpool, earning the Red, White, and Blue its first win on foreign soil since 2007. Players with Met Area ties played a strong role in the victory, having a hand in eight of the team's points.

John Pak of Scotch Plains, N.J., and Brandon Wu of Scarsdale, N.Y., helped tally the United States side's first two points in Saturday morning's foursomes (alternate shot), as Pak paired with Isaiah Salinda of South San Francisco, Calif., and Wu with Alex Smalley of Greensboro, N.C., to both earn 2-and-1 victories. Pak and Wu continued to roll in the afternoon singles, both picking up singles victories. Pak's proved especially important as he won the final two holes of his match against James Sugrue to claim a 1-up victory. However, with GB&I winning five of the eight singles matches, the U.S. trailed 7-5 entering the final day of play.

On Sunday, 2016 MGA Player of the Year Stewart Hagestad bounced back to pick up two points on the day. After he and Akshay Bhatia lost Saturday's foursomes match against Harry Hall and Conor Gough, the duo claimed a redemptive 3-and-2 victory over the duo to help the U.S. side win the session 2.5 to 1.5 and trim the team's deficit to just one (8.5 to 7.5) entering the final 10 singles matches. Wu also picked up another victory in the session, once again pairing with Smalley for a 2-and-1 win.

Out second in the singles lineup, Florida State junior Pak earned a 2-and-1 win over Euan Walker, completing a perfect 3-0 weekend in his Walker Cup debut and standing as the only player on either side to not lose a match. While Wu fell in his singles match, the Stanford graduate also finished with three points, taking part in all four sessions. Hagestad also locked up a big win in singles, defeating Harry Hall by a 5-and-3 margin, as the U.S. matched its dominating 8-2 singles performance from two years ago at Los Angeles Country Club to complete the come-from-behind victory.

The Walker Cup also provided a glimpse of insight for October 22-23's Carey Cup matches in which players from the MGA take on the Golfing Union of Ireland. Conor Purcell, Caolan Rafferty and James Sugrue all competed for GB&I and will be part of the competition at Arcola Country Club in Paramus, N.J. The trio went 2-6 in Walker Cup play, with Purcell helping claim a foursomes victory on Saturday morning and Rafferty winning his singles match Saturday afternoon.

As the only Walker Cup veteran on Captain Nathaniel Crosby's 10-man team, Hagestad is aiming for a similar result to the United States' 12-point win in 2017 at Los Angeles Country Club. While Hagestad – currently the No. 7 player in the World Amateur Golf Ranking – has the experience from that victory, he's confident in the skill of his new team this week as they look to capture another victory.

"If they ask me anything about maybe the first tee shot or matches or whatever, I'll do my best to answer for them, but the reality is I'm just going to stay out of their way," remarked Hagestad. "They're so good."

Florida State All-American Pak along with Stanford graduate Wu are two of those players looking to help lead the U.S. to victory.

Pak had a standout sophomore campaign, in which he set the school's single-year scoring average (69.56) and won four events including the Atlantic Coast Conference Championship. He's continued his stellar play through the summer, posting high finishes at the Sunnehanna Amateur, the Porter Cup and advancing to the Round of 16 at the U.S. Amateur.

While Pak, and much of the U.S. Team, has limited links experience, he feels portions of the game can be related to his experience in the Met Area. "My home course in New Jersey, Royce Brook Golf Club, there's fescue just like this," said Pak. "So, I have played in this and I have hit it in here before, but sometimes you can barely hack it out and it really depends on the lie you get out here."

Following his national championship season at Stanford, Wu – of Scarsdale Golf Club – finished tied for 35th in the U.S. Open at Pebble Beach and claimed medalist honors at the U.S. Amateur, while also qualifying for the Open Championship at Royal Portrush. The 22-year-old was born in California, moved to Beijing at the age of 8 and later to Scarsdale at the age of 13.

The United States owns a 36-9-1 record in the event, but the U.S. team's last win on foreign soil came in 2007 at Royal County Down. "The boys on the GB&I side are just as good, and now we're on their turf," notes Hagestad.

Each of the two competition days features foursomes (alternate-shot) matches in the morning followed by singles matches in the afternoon. On Saturday, there are eight singles matches, while all 10 players from each side compete in singles on Sunday. One full point is awarded for each victory, while a half-point is earned for matches that are all square after 18 holes.

The Walker Cup Match is also an opportunity to see a trio of players that will represent the Golfing Union of Ireland against the MGA in October's 15th Governor Hugh L. Carey Challenge Cup. Conor Purcell, Caolan Rafferty and James Sugrue are all slated to compete in the biennial matches at Arcola Country Club in Paramus, N.J., Oct. 22-23.