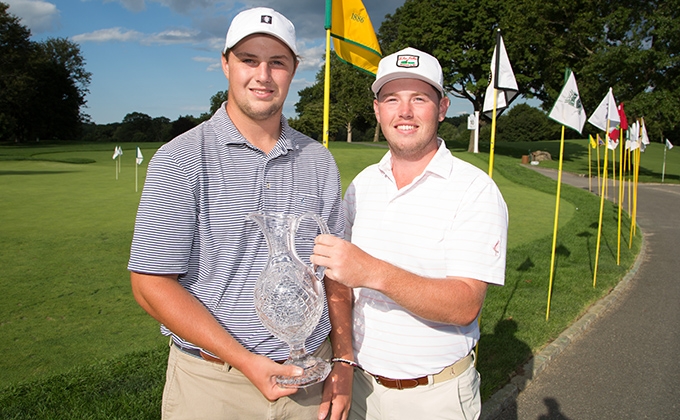 At 17-years-old and 8 months, Jack Wall became the third-youngest low amateur in the storied history of the Met Open Championship. Pictured here with his brother Ethan (R), his caddie at the Met Open.

ELMSFORD, N.Y. (October 15, 2018) – Upon the end of the season-long points race for Met Area juniors, the Metropolitan Golf Association is pleased to announce Jack Wall of Brielle, N.J., as the recipient of the 2018 MGA Junior Player of the Year Award, Presented by Callaway Golf. Wall’s second-place finish as low amateur in the 103rd Met Open served as the 17-year-old’s crowning achievement of the season, propelling him to earn the honor that is now in its second year. Wall, a senior at Christian Brothers Academy, will be recognized for his accomplishment at the MGA’s 121st Annual Meeting and Dinner on Wednesday, December 5 at Westchester Country Club in Harrison, N.Y.

The MGA Junior Player of the Year Award, Presented by Callaway Golf, was established to recognize excellence among the highly talented junior competitors in the Met Area, with an emphasis put on the region’s top junior events including the Met Junior Championship Sponsored by MetLife and the Carter Cup, the MGA’s invitational junior stroke play championship. Jake Mayer of Scotch Plains, N.J., captured the award in its inaugural season last year. Similar to the MGA Jerry Courville Sr. Player of the Year Award, a season-long points race helps determine the recipient.

“It means a lot to me to win the Junior Player of the Year Award because it shows how consistent I played throughout the season,” said Wall. “I checked the point standings every once in a while during the season, but I just tried to play good golf and let the points tally up.”

Wall’s first point-earning event of the season certainly showed his potential for the summer to come, as he captured medalist honors in his U.S. Open local qualifying round at Spring Lake Golf Club in Spring Lake, N.J. He had another impressive performance at U.S. Open sectional qualifying, narrowly missing out on a playoff for the final advancing position.

His schedule then began to pick up in July beginning with the New Jersey Amateur. Wall—who was named as NJ.com’s Boys Golf Player of the Year and has verbally committed to University of South Carolina—vaulted himself up the leaderboard with a final-round 68 at Echo Lake to force a playoff against Dylan Stein. While Stein claimed victory, Wall racked up 120 points and took a strong position in the standings with junior events up next.

Wall gained qualifying points in both the Met Junior and New Jersey’s William Y. Dear Junior—in addition to the the Met Amateur—but had his best junior championship performance at Winged Foot Golf Club, tying for third in the Carter Cup.

Entering the 103rd Met Open Championship Presented by Callaway at Wykagyl Country Club, Wall stood behind points leader Carter Prince of Centerport, N.Y., who won the Carter Cup in addition to advancing to the quarterfinal round of both the Long Island Amateur and Met Junior. But, Wall saved his best performance for last, as he fired impressive rounds of 69-67-70 on the Met Area’s grandest stage. Finishing one shot behind winner Andy Svoboda, Wall took solo second and became the third-youngest low amateur in the championship’s storied history. The impressive finish earned Wall 350 points, propelling his name to the top of the list with 683 points for the season.

“To win low amateur at the Met Open was such an honor because it’s such a prestigious event,” said Wall after some time to reflect on his accomplishment. “Also, it was great to play so well against such a talented field at Wykagyl. I am really proud of myself for handling the pressure of being in the final group.”

The MGA welcomed Callaway Golf as the Association’s championships partner in January of 2017. Elements of the partnership included Callaway tying its name to some of the country’s oldest and most prestigious championships including the Met Open, MGA Senior Open and Ike championships and becoming the launch sponsor for the MGA’s first-ever Junior Player of the Year Award.