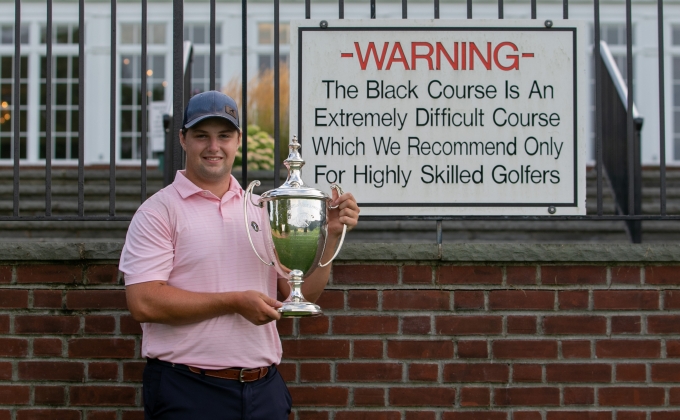 Jack Wall won the 118th Met Amateur Championship as the No. 15 seed.

FARMINGDALE, N.Y. (August 2, 2020) – Consistency paid off in a big way for Jack Wall of Manasquan River on Sunday in the 36-hole final of the 118th Met Amateur Championship at Bethpage Black, as the 19-year-old used pars in the afternoon to battle back against Luke Sample of Old Oaks and claim victory by a 4-and-2 margin.

Wall faced a two-hole deficit entering the afternoon 18, but won five holes with par while also rolling in a trio of birdies to complete the comeback and hoist the trophy for the MGA’s oldest championship.

In the morning, Wall captured the lead by winning Nos. 1 and 4 with par to set his tone for the day.

“I really liked the way I started, just consistent to start off right out of the gate,” said Wall, two-time winner of the MGA Junior Player of the Year Award and rising sophomore at University of South Carolina. “I just made some solid pars and got my bearings, but then Luke really made a push over the last 13 holes [of the morning].”

Sample, just a couple weeks removed from winning the 103rd Met Junior, carded five birdies over the final 12 holes of the morning to capture a 2-up advantage.

Of Sample’s run, Wall said, “Unfortunately, I just couldn’t keep up with him in the morning and didn’t make many putts. I don’t think I had a birdie in the first 18 so that was a huge factor in the score.”

One key, however, was Wall winning the 18th to make the deficit two instead of three. Wall had a good look at birdie conceded as Sample battled fescue around three different bunkers on the 18th hole.

“Two down is very manageable, three starts to get to a point where we come back out here, he wins a couple of holes and all of a sudden you’re 5-down and it’s hard to come back from that,” said Wall. “But I think getting it back to 2 really gave me some confidence to come back out here and work hard and try and get it back.”

Wall quickly leveled the match in the afternoon behind a par-three on the third and a birdie-four on the fourth, then regained the lead with par on the par-4 sixth. While Sample quickly responded with an eagle on the par-5 seventh to tie the match again, Wall then hit what he calls the turning point in the match.

“Luke had made a fantastic eagle on seven to get it back to tied and then in my mind, it’s tied, basically we’re starting off fresh here and let’s go get a couple,” said Wall. “I hit a really good shot on eight to about 12 feet or so for birdie and made that putt, which was good and then continued rolling on 9 with another birdie, so I think that was a huge point in the match where I got up a little bit and I got comfortable and just kept on pushing to get farther up.”

Pars tied Nos. 10 and 11, while the pair traded pars for wins on Nos. 12 and 13 as afternoon winds picked up around Bethpage.

Wall kept the pars coming when it mattered most, claiming Nos. 14 and 16 with pars to close out the match by a 4-and-2 margin.

Sample's run to the final was a memorable one, starting with surviving a 9-hole playoff Thursday evening for the final spot. He proceded to defeat top-seeded Sam Bernstein in 19 holes, then tallied an ace on the 14th during Friday's quarterfinal match.

For Wall, the key to the afternoon was his putting performance—a piece of his game that ended his run in last year’s Met Amateur Championship in a 19-hole loss to eventual champion Chris Gotterup of Rumson.

“I thought that even though I didn’t make many 20-footers I was very good at making those four-footers, five-footers for par, especially on that stretch of 11 and 12 getting up and down on 11 from the fescue and making a really clutch putt there just to keep the momentum going.”

Wall, who was the low amateur in the 2018 Met Open Championship, calls this his biggest victory.

“I think this one definitely means the most and is the biggest just because it’s such a great field of great amateurs in our area so I would rank it on the top of the list for sure,” said Wall. “Especially to do it here at Bethpage Black which has so much history and so many great winners like Brooks Koepka and all of them, it’s truly amazing and I’m very blessed to have done it here.” Thursday was the first time that Wall played the course, saying he sometimes plays better going into a course blind because he doesn't think of all the possible trouble. He fired a 1-over 72 on Thursday, taking the No. 15 seed into match play and on to victory.

Bethpage State Park’s famed Black Course was a true test for the players in stroke play and provided plenty of excitement throughout match play. As host this week, Bethpage Black became the first-ever public course to welcome the MGA’s oldest championship. It also became the 18th venue to have hosted the MGA’s trio of majors—the Ike, Met Amateur and Met Open.

As always, the Black Course was in immaculate condition, with the grounds crew working especially hard Friday morning after heavy rains suspended the Round of 16 matches.