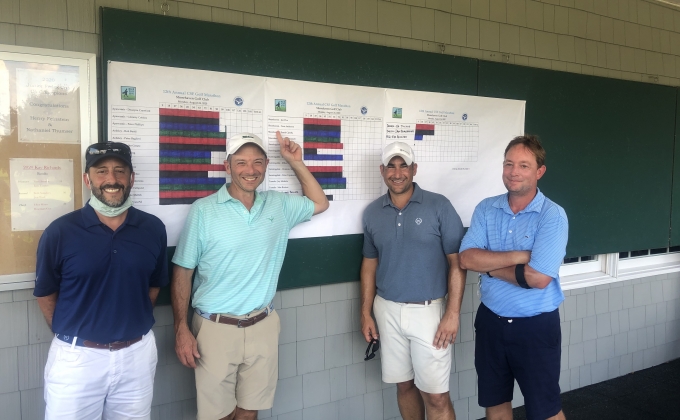 On Monday, August 24, 32 supporters of the Westchester Golf Association Caddie Scholarship Fund raced around the course at Shorehaven Golf Club to play as many holes possible in the 12th Annual WGACSF Golf Marathon. Participants included area caddie managers, caddie scholar alumni, and friends of the fund, all who collected pledges to support local caddies’ goals to pursue their education.

A total of 2,261 holes were played at Shorehaven, reaching an estimated $110,000 in pledges from supporters.

Shorehaven’s own Caddie Manager Joe Pica was the top fundraiser this year, collecting more than $62,000 in donations from friends, family, and the Shorehaven membership. Pica played 72 holes along with longtime friends Tom Anderson, Frank Cipolla and Niall O’Donnell, and broke his 2019 fundraising record by more than $15,000.

“I’ve always been a big supporter of the WGACSF and this year put a bit more pressure on me as the host,” said Pica. Although he didn’t know what to expect this year, the Shorehaven membership came together to support Pica’s efforts and raise funds that directly impact more than 270 local caddies and those who work in service to golf.

“The Shorehaven membership was outstanding in coming through,” he said after his 72-hole day. “They stepped up to the plate like I’ve never seen before, and over $60,000 this year, it just blows my mind. I’m pretty proud of that.”

Pica, current President of the Caddie and Golf Service Managers Association (CGSMA), has participated in the annual WGACSF marathon the past five different years.  In 2018, Joe was awarded the WGACSF’s Caddie Manager of the Year award for his outstanding participation in the Marathon at Knollwood, where he raised more than $26,000.  Joe, dedicated and humble, teed off at Knollwood at 8 a.m. to play as many holes as he could before leaving for a CGSMA event at Bedford, only to come back to Knollwood to complete the task he set out to accomplish: to play as many holes in the marathon as he could.  Not even the 100-degree day could stop his drive.

Shorehaven, located in Norwalk, Conn., is a longtime supporter of the WGACSF. A group of 13 caddie scholars from Shorehaven have received $130,000 in scholarship aid from the Fund; two of whom volunteered the morning of the marathon.

Pica oversees a strong youth caddie program at the club and has seen many caddies, those who work in the bag room and on the grounds crew pursue their educations with the assistance of a caddie scholarship. Thanks to the generous support of clubs like Shorehaven, the WGACSF has been able to consistently provide financial assistance to deserving scholars, something in which Pica takes great pride.

“I got an email from one of my recipients, and it’s been a tough year, but he sent me this email telling me how much the caddie scholarship meant to him, and I can’t tell you what that made me feel like. A couple of tears came, that’s for sure,” he said. “He said that if it had not been for this scholarship, [college] might not have happened for him.” This scholar is headed to Syracuse University.

The WGACSF marathon has grown into the program’s largest one-day fundraiser, thanks to the dedication of all participants. Like Pica, other area caddie managers maintain fundraising initiatives at their clubs, receiving pledges per hole and creating competitions amongst friends of who can play the most holes. 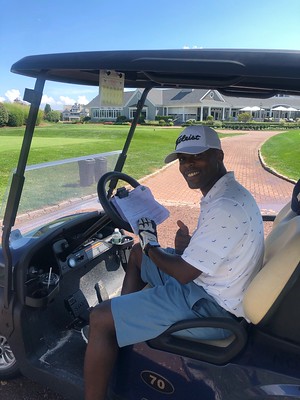 Also at Shorehaven, Al Valdovinos, a longtime marathon participant, and his three teammates from The Patterson Club, played the quickest 100 holes that day, one of whom even ended with a birdie. It wouldn’t be a marathon without Rob Bucci and Team Ardsley, who might have played in the most marathons right behind Deuayne Crawford from Apawamis, who has played in all but one. Alumnus Paul Cedrone played the most holes of the field that day, clocking in at 105!

Team Sunningdale, the friendliest fundraising rival to Joe Pica, had the largest team with 6 total participants.  Under the leadership of Caddie Manager Kyle Sedlacek, Sunningdale’s generous membership pledges nearly more than $30,000 annually in support of Kyle, Dom, and the rest of the team.

Gary Penebre, Caddie Manager at the Country Club of Darien, was welcomed to his first marathon with 90-degree heat.  Several CCD members came to Shorehaven throughout the day to play with Gary and encourage him to complete his 72 hole goal.  His perseverance brought him to the finish line and his enthusiasm for the event brought the Club back on the roster of participants after a several year hiatus.

“I’ve been caddieing at Apawamis since I was 17. I received the scholarship and realized how good [the WGACSF] was to me, so I’m trying to do the same thing and give back,” he shared during the marathon. “The caddie scholarship fund inspires people to go school and get an education, and I think it’s good that it puts young people in golf. It’s a really good way to meet really good people, it teaches respect, and golf has a really good culture, so [golf] is a great thing to get into in general.”

WGACSF Director Jay Mottola and Tuxedo assistant professional Max Breiner each played 85 holes, dedicating their fundraising efforts to the Jay Mottola Scholarship. The JMS, announced as a new MGA Foundation initiative in 2018, provides a significant financial grant to an outstanding caddie or young person who works to service in golf in the Met Area. The JMS brings together the Met Area’s three local CSFs – Westchester, Long Island, and New Jersey – to serve as the scholarship’s selection committee.  Fittingly, the first recipient of the Jay Mottola Scholarship is current WGACSF scholar, Sam Masters, longtime caddie at Bonnie Briar Country Club.

Shorehaven, located alongside the Long Island Sound, provided a fun day for all participants and the course was a perfect backdrop for a full day of golf.

Learn more about the WGACSF and the Annual Golf Marathon.