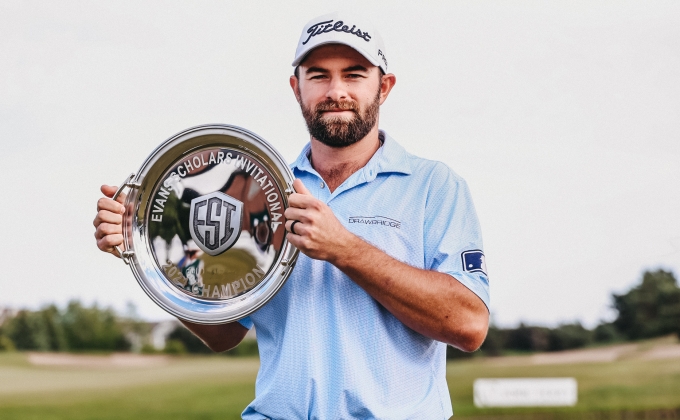 ELMSFORD, N.Y. (May 30, 2021) -- A week after collecting his first career Korn Ferry Tour victory, Cameron Young quickly clinched his second at the Evans Scholar Invitational at The Glen Club in Glenville, Ill. Young earned the victory in convincing fashion, using rounds of 64-68-67-67 to shoot 18-under 266 and win by five shots. The four-time MGA champion and 2016 MGA Player of the Year has now held the outright lead after seven of the last eight rounds on the Korn Ferry Tour and was co-leader following Thursday's opening round.

Despite facing especially challenging weather over the first two rounds with his late, early draw, Young continued his momentum following last week's victory. His 10-under score, which was six shots better than the next best in his wave, earned him a one-shot lead going into the weekend. Young kept his aggressive strategy going through the weekend, never letting up en route to his five-shot victory. With the win, Young became the first back-to-back winner on the Korn Ferry Tour since 2013.

“I drive the ball a lot better than I have previously," said Young following his win. "It's something that's improved dramatically over the last year or two. You can look back and say I missed a bunch of cuts early this year, but it wasn't that different. It's just a little bit here and there and not being as comfortable on the greens, and that really has changed how I feel out here and has dramatically changed my scoring. Just that little bit of confidence in making one or two more a day is adding up a lot.”

Young began the 2020 season with no status, but after Monday qualifying for an event last August he earned finishes of T11-T14-T6-T2 to gain Special Temporary Membership on the Korn Ferry Tour. His win last week lifted him from 70th to 26th on the Tour's points list while this week's victory launches him to No. 13 on the listing. The top 25 at season's end earn a PGA TOUR card, but a third victory would immediately send Young to the PGA TOUR.

"That's what I want. To win again,” said Young. “I think there would be something wrong with me if I didn't say that. I do want to be [on the PGA TOUR] as fast as I can be, and if it means winning again, it's winning again.”

Young and the Korn Ferry Tour now head to Raleigh, N.C., next week for the REX Hospital Open.