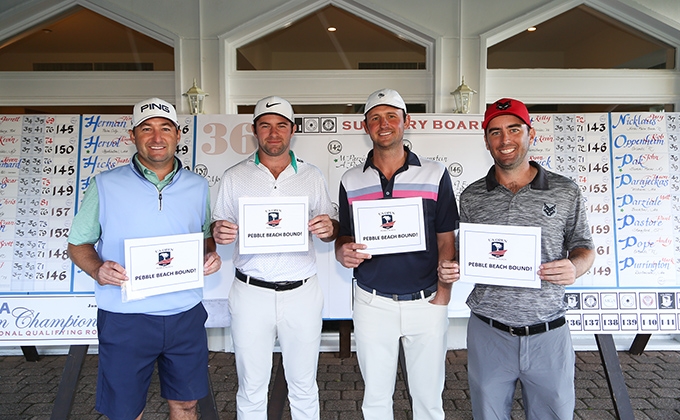 Young’s 4-under total bested the 73-player field by five shots, while Andy Pope of Glen Ellyn, Ill., amateur Matt Parziale of Brockton, Mass., and Rob Oppenheim of Andover, Mass., earned their way into this year’s national championship as well.

Young and Pope, playing alongside one another, shot the morning’s only sub-par scores at Old Oaks, both carding 1-under 69s. Despite winds picking up late in the morning and carrying on throughout the afternoon, Young continued to roll, especially over his final nine holes. Young, a four-time MGA champion and recent Wake Forest graduate, tallied four birdies over his final eight holes en route to the 137 total.

“I knew that he had gotten to a comfortable spot where it didn’t really matter what he was doing, but I knew I was close enough that if I kept plugging along, then I could make it,” said Pope, who will make his fourth U.S. Open appearance. “Sure enough it was alright.”

Young, meanwhile, will make his first-ever U.S. Open appearance and is looking forward to the experience. “Obviously I like to play well wherever I’m going, whether it’s an amateur or an open, the Met Open, or anything like that,” said Young. “So obviously the goal is to play well and play to a level I think I can play to, but to be honest I don’t really know what to expect.”

Parziale, the 2017 U.S. Mid-Amateur champion who shared low-amateur honors in last year’s U.S. Open at Shinnecock Hills, began with a 69 at Century thanks in part to four birdies over his first eight holes. Though pleased with the start, Parziale knew it was a long day ahead and remained focused on the end goal. “I knew the wind was going to pick up to make it much more challenging in the afternoon,” said Parziale, who will compete in his 14th USGA championship. “Scores went higher, so did mine, but I was happy to hang on there at the end.”

Oppenheim shot 72 in the morning at Old Oaks before steadying things out in the afternoon at Century, where he carded a birdie and a bogey along with 16 pars. His 2-over 143 led him into a playoff with Kelly Kraft of Dallas, Texas. Pars on the par-four 1st and par-five 18th at Old Oaks secured his trip to Pebble Beach.

“It was a long day. I’m just excited,” said Oppenheim, who has twice qualified for the U.S. Open in the Met Area. “Pebble Beach is my favorite golf course in the world, and to get to play in the U.S. Open there is going to be pretty special, so I can’t wait,” said Oppenheim, who’s PGA TOUR-best finish of eighth place came in the Pebble Beach Pro-Am.

“It was tough to tell what it was going to take out there. I just played very conservative and tried to keep the ball below the pin,” said Oppenheim of his round at Century. “I made a lot of pars and fortunately I didn’t know where I stood coming down the stretch. I knew pars were good scores and I was fortunate to get into the playoff.”

In other qualifying locations, 2017 MGA Player of the Year Stewart Hagestad earned a spot in the U.S. Open for the second straight year, doing so out of Newport Beach, Calif. Hagestad's qualifying day including a hole-in-one on Newport Beach Country Club's par-three 4th hole. Brandon Wu of Scarsdale, N.Y., advanced out of the challenging field in Columbus, Ohio.

The 119th U.S. Open Championship will be contested at Pebble Beach Golf Links for the sixth time, June 10-16.