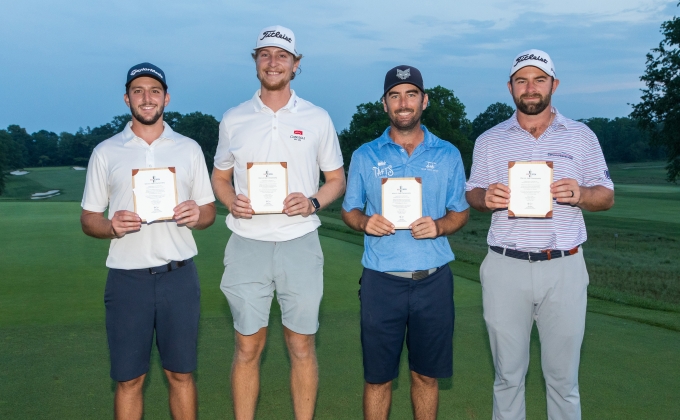 “We’re traveling every week and 90% of the time we’re going somewhere we’ve never been,” said Young on competing on the Korn Ferry Tour, where he won back-to-back titles to close the month of May. “So to come home and see my parents and be at a place I’m comfortable and I’m familiar with is a nice change. We haven’t gotten that much recently.”

Young made his first U.S. Open appearance in 2019, when he also earned medalist honors in the Purchase, N.Y., qualifier. He was planning for a similar performance this time around.

“I expected to get through,” said Young. “Knowing the places like I do and feeling like my game’s in a pretty good spot, it’s hard not to think you’re going to get through. We’ve been saying we’re going to Torrey Pines for about a month now. I’m very happy to get through and very happy with how I finished it off today, but this was our plan, so it’s really just our plan kind of coming to fruition.”

Young posted a 3-under 67 at Old Oaks to start his day, matching Pope’s morning 67 that came at Century. Young played his opening nine in even-par at Century in the afternoon before lightning suspended play at 2:24 p.m. Though players returned to the course briefly, lightning returned and ultimately suspended play until 5:15 p.m.

Upon returning to the course, Young carded five birdies on the way in for a sizzling 31 on his inward nine that created space between him and the field.

“I’ll be there to play in a U.S. Open, as opposed to kind of to experience one, if that makes sense,” said Young. “Last time I was there I was marveling at the people and the tents and the food and the golf course, I mean Pebble Beach is breathtaking. Having been around professional golf a little bit more, having been around crowds—especially recently—a little bit more and having been to Torrey Pines will be a big difference for me in terms of just stepping on the first tee and feeling like I’m playing golf.”

Meanwhile, Pope backed up his morning round with an even-par 70 at Old Oaks to secure his spot in his fifth U.S. Open, four of which he has advanced to through qualifying in the Met Area.

“The quality of courses here I think are unbelievable,” said Pope. “They’re ready for U.S. Opens, their greens are really fast, they make you think and growing up in Chicago, I played a lot of tree-lined courses where putting the ball in the fairway was a premium.”

Though Pope has never been to Torrey Pines, he’s looking forward to playing to his strengths and not letting the course’s length get the best of him. “From what everyone says it’s long, but I know Rocco Mediate was contending with Tiger there, so I don’t think you have to be the longest. It’s the U.S. Open, so I think it puts a premium of driving the ball and I do a good job of putting it in play off the tee.”

Hervol tallied a pair of 68s on the day to finish second to Young, despite not having played competitively since his U.S. Open local qualifier in early May. “. I knew the game was good and it was just about keeping it tight for competition. I was able to keep myself calm and just treated it like a regular day.”

Though Hervol had a pair of early bogeys during his afternoon round at Century, he turned things around, making three birdies in a four-hole stretch before adding one more on the par-5 eighth as he finished his round on the front nine. “I hit it solid, managed the mistakes and never put myself in too bad of a position.”

Zaback secured the final advancing position with rounds of 68-70, also finishing his day at Century. Despite tough starts at both courses—3-over through three at Old Oaks and 2-over through four holes at Century—Zaback remained poised and found his game in both rounds. In the afternoon, the suspension turned up just in time.

“It probably came at a good time,” said Zaback, who went on to roll in five birdies over his final 11 holes. “I strung a few more birdies on the end of the front nine and kind of ground it out from there.”

Two alternate spots were also decided in a 3-for-1 playoff at 2-under. Ben Polland of Bloomington, Minn., secured the first alternate with birdie on Century’s par-4 first. Rob Oppenheim of Andover, Mass., took the second spot with birdie on the par-4 18th, the second playoff hole.