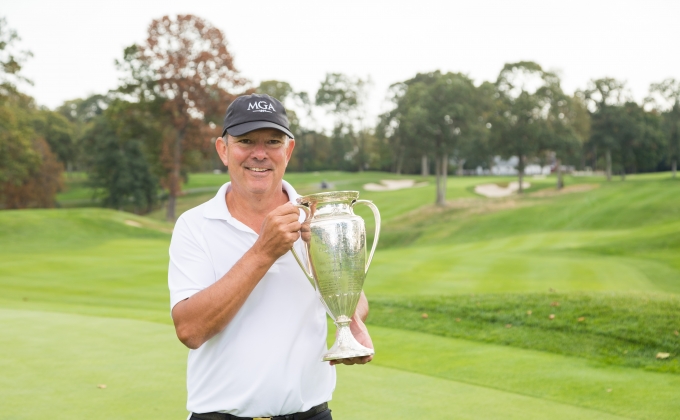 OYSTER BAY, N.Y. - (October 7, 2020) - Ned Zachar of GlenArbor won the 93rd MGA Senior Amateur Championship at the Mill River Club, edging out first-round leader Roger Hoit of Baltusrol by one shot. Zachar won his first MGA title with rounds of 69-72 to finish at 3-under for the championship. Hoit finished with a 2-under total after rounds of 66-76.

Zachar entered the final round three shots behind Hoit after opening with a 3-under 69. His first round included four birdies and just one bogey. "Yesterday I hit 18 greens. I had a couple of kick-ins and it was the simplest round ever. It could have been lower, but that's golf, sometimes you can't get all of the breaks going your way," said Zachar.

Meanwhile, Hoit had gotten off to a hot start to the event, carding 8 birdies for a 6-under 66 in his first round. During the final 18 holes, he got off to a great start, with three birdies and one bogey on the front. On the back nine, however, he struggled with a triple bogey on 11 followed by a double bogey on the par-3 12th. Zachar was able to keep it steady during his round, with no bogeys on the front and birdie on the par-3 7th. On Zachar's back nine, he had bogeys on 10 and 14, but followed that up with a birdie on the par-4 15th.

"I three putted, didn’t get up and down for par after hitting three shots on 14, that was unfortunate because I did play the hole just exactly the way I wanted, but I said listen, this is not over," Zachar said. After the 14th, he was then only one shot back from the lead. "I hit a very good drive [on 15] in the middle of the fairway, then I hit a wedge to about three feet. I made the birdie, Roger made a 5, and that was a very big turning point because then I had a two shot lead with only a couple of holes to go. There's always one little important moment in the context of a round like that, and that was definitely one," he shared.

Hoit, the 2006 MGA Ike Stroke Play Champion, finished his round with a bogey on 16, a birdie on 17, and a par on 18 for a round of 76 to finish at 2-under for the championship. Zachar made steady pars on 16, 17, and 18 for his round of 72 to finish at 3-under total and earn him his first MGA victory. Zachar serves on the MGA's Executive Committee as Secretary, and this is his first MGA title after competing in events for nearly 20 years.

"It was amazing. I felt like I've been knocking on the door in this tournament a couple years in a row," he said. Zachar finished in third place in both 2019 at Montclair and 2018 at Old Oaks. "I felt like, fairways and greens, keep it in play, make good putts, and by and large that's exactly what happened. The last putt was a little longer than I wanted but you just keep you head super still and that thing rolled right in the middle so it was great," Zachar said.

Jay Sessa of Cherry Valley, Tom Trakoval of Port Jefferson and Dave Scialabba of Meadow Brook all finished at 1-over for the championship. Adam Kugler of Alpine was at 2-over, while Ed Gibstein of Glen Head and Matthew Meyer of Winged foot finished with scores of 3-over.