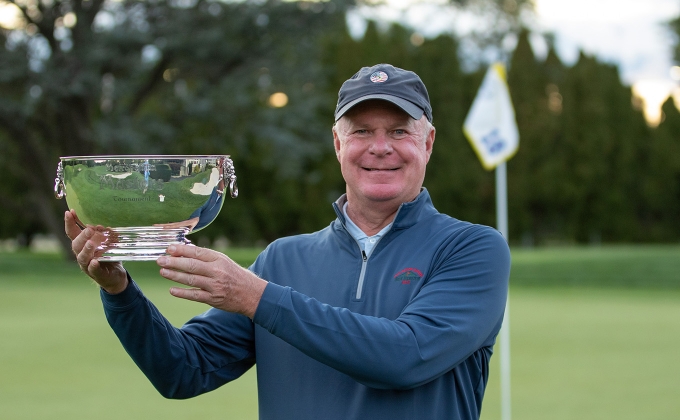 HEMPSTEAD, N.Y. (October 1, 2021) -- George Zahringer of Deepdale bested the competition by six strokes in a commanding performance in Thursday's 10th MGA Senior Masters Tournament at Hempstead Golf & Country Club. The 68-year-old Zahringer shot lower than his age for the first time, firing an impressive 5-under 67 that included six birdies and just one bogey on his last hole of the round.

"My wedge game and my approaches from the fairways were pretty good and I made some putts," said Zahringer, who extended his record number of MGA victories to 20. "I hit it close, two or three feet, a couple times and made some good putts for the other birdies."

Zahringer, a 10-time MGA Player of the Year, has now claimed the Senior Masters three of the last four years. "It probably doesn't mean anything to anybody, but it was important for me," said Zahringer of reaching the unimaginable 20-win mark. "You know, 19 is great, 15 was great, 10 was great, 1 is great, but 20 just seems like a nice round number and if I never win another MGA championship, I'm not going to be unhappy."

A three-way-tie for second followed Zahringer in the gross division, with Tom Evans of Siwanoy, Jay Sessa of Cherry Valley and Jim Romaniello of Shorehaven all shooting 1-over 73s.

Zahringer also had the top net score of 3-under 69, with David Pilossoph of Bronx River Golf Club carding an even-par net round.