GOLFWORKS Intern Swinging For the Fences

GOLFWORKS Intern Swinging For the Fences

SCARBOROUGH, N.Y. (September 25, 2012)– At 14-years-old, Aidan D’Allesandro of Yorktown Heights, N.Y., is one of the youngest participants serving 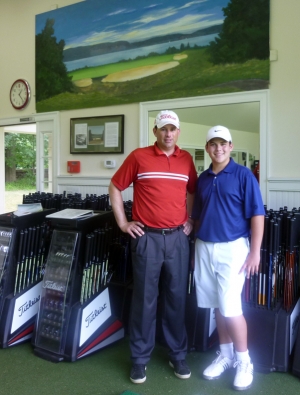 D’Allessandro was no stranger to the GOLFWORKS program, as his older brother, Anthony, worked as a GOLFWORKS intern at Trump National—Westchester in Braircliff Manor, N.Y. for three summers.

“I watched my brother have a great experience, who’s now attending Fordham’s business school,” says the younger D’Allessandro, who is a member of the Future Business Leaders of America at Yorktown’s Mildred E. Strang Middle School.

D’Allessandro’s workplace is the teaching center on the backend of Sleepy Hollow’s driving range, which is one of five Titleist Regional Fitting Centers inthe country. Before lessons and fittings start, D’Allessandro checks a whiteboard, which has tasks Sprecher would like him to complete, such as vacuuming, dusting and filing lesson notes from the previous day. Once lessons start, D’Allessandro is there to carry the members’ bags, clean their clubs and start and stop the multiple cameras Sprecher uses to record swings.

“Aidan has been helpful with all the little things that I can’t get to and it really adds a level of customer service we provide, which is great,” says Sprecher, a  twice-nominated GOLF Magazine Top 100 Teachers in America. “And all the members really love having him around.”

D’Allessandro can often be found working on his game once his shift is over, and on his off days he is more than likely playing on the Met PGA’s Junior Tour. He has been enjoying his job while learning about the golf swing, getting to see firsthand how the technology at Sleepy Hollow’s Teaching Center can benefit Sprecher’s students.

“Kevin knows his stuff, so I’m learning a lot,” he says.  “The Trackman [launch monitor] and the cameras help [his students] out a lot, and they ‘re really cool machines because they show golfers what they’re doing and what they need to work on instead of just hearing what they should be doing. I’ll even ask Kevin for a little help every now and again and he is always willing to give me tips and pointers.”

D’Allessandro has demonstrated a strong work ethic while becoming an asset to Sprecher. Despite having four years of high school ahead of him, D’Allessandro already has the maturity and poise of an adult, who very much appreciates the opportunity he has to work.

“I’ve never had a job before, but I am motivated and dedicated to working hard, and it’s a nice reward to get paid every two weeks,” he says. “What’s even better is that my parents are very proud of me and that means a lot to me.”