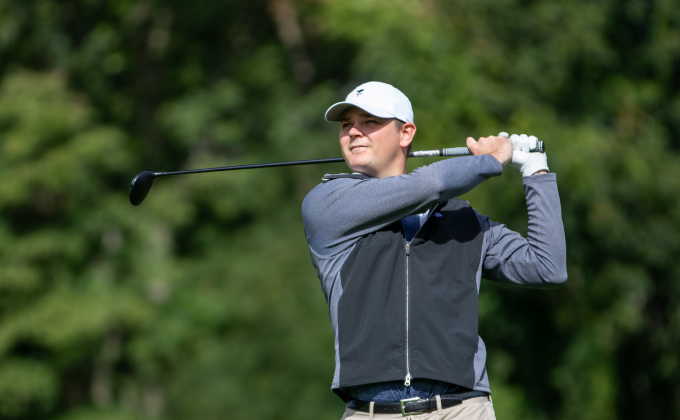 Stamford, Conn. (October 6, 2021) -- After day one of the 12th WGA Mid-Amateur at Rockrimmon Country Club Mark Mumford leads the tournament by one stroke.

Mumford of Westchester Country Club was in the clubhouse at even-par near midday and by day's end was still the only player able to avoid plus-numbers. He closed out his round with a birdie on the last to finish the back nine in 3-under.

“I made a lot of 15-20 footers on the front to stay in the round,” said Mumford. “Going into the back nine, my goal was even par on that side. I dropped an eagle on 15 which always helps, but it was nice to get back to even on the round with that birdie on the last.”

Patrick Pierson of New York Country Club, a 3-time winner of the WGA Mid-Am, finds himself in contention once again. He posted a 1-over round of 73 and sits just one off the lead. Pierson first won the event in 2014, when it was hosted at Rockrimmon for the first time. His other two wins at the WGA Mid-Am came in 2016 and 2017.

Three players came in at 2-over and another four sit three strokes back at 3-over. Ned Zachar of GlenArbor, the 93rd MGA Senior Amateur champion, closed his round with two bogeys to finish at +4.  Despite that he is still well in the mix.

Forty-three players qualified for the tournament’s final round, which is slated to begin at 8:30 a.m. on Thursday morning. The cut after the first round fell at 10-over 82.

“It’s going to be about hitting the ball well and in the right spots,” said Mumford. “You really have to put yourself in the right position to have success on this course.”

The field will be competing for the championship trophy, which is now named in honor of Robert J. Bluestone, who passed away in July of 2019. Bluestone was a former president of Rockrimmon Country Club and spent much of his time at the Stamford, Conn., Club. He dedicated many years serving as a volunteer on the MGA Executive Committee and MGA Foundation’s Board of Directors and served as president of the Westchester Golf Association and its Caddie Scholarship Fund.