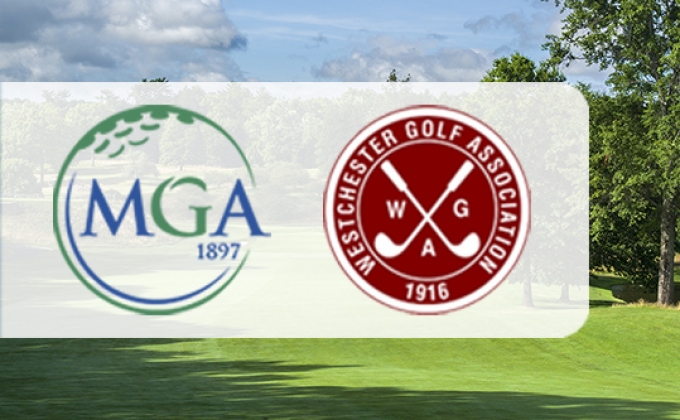 ELMSFORD, N.Y. (March 1, 2017) – The Metropolitan Golf Association is pleased to announce a new collaboration with the Westchester Golf Association that will integrate services between the two associations.

The mission of the collaboration is to deliver superior service to clubs and their members within the Metropolitan New York area by joining efforts of the volunteer leadership and staff of both organizations. These joint efforts will uphold the values, spirit and many benefits of golf through competition and grow-the-game initiatives, while also increasing support for caddies and junior golf.

“Over the past few years, we have really examined the golf landscape of the Met Area,” says MGA president Michael Sullivan. “That has led us to identify ways in which we can work together with the many golf associations in our area to be more efficient and provide better services for the golfing community.”

The partnership between the two historic golf associations will involve the sharing of organizational resources and volunteers to allow for a stronger and more effective delivery of services and championship experiences. Meanwhile, streamlined communications will deliver a consistent message, with all information for WGA events made available through the MGA’s official and newly redesigned website mgagolf.org, at www.mgagolf.org/wga.

While services will be formally coordinated, an important piece of the initiative is maintaining the WGA name and identity that has played such an important role in the region for over 100 years.

“The WGA is very proud of its 100 years of service to area golfers,” says WGA president Ben Kirschenbaum. “As we start our second century, it’s important to honor the history, traditions, and brand developed by the WGA over time, and we’re confident the MGA is best able to preserve and promote these items for years to come.”

WGA activities will be powered by the MGA in the 2017 season and beyond. Longtime WGA executive director Bob Thomas will work closely with the MGA through this process and throughout the course of the season, assisting at WGA, MGA and USGA qualifying events. Following a reevaluation of all WGA championships, entry fees and exemptions were made consistent with the MGA’s, while eligibility was modernized and now more accurately captures the WGA demographic.

The process of combining repetitive events is also underway. One of the first steps in this process happened in 2016 as the MGA Junior Championship Sectional Qualifying Round (SQR) and WGA Junior Championship ran concurrently at Knollwood. This movement will continue in 2017 with more combined events. The WGA Public Links Championship will follow suit, its championship running parallel with an MGA Public Links SQR at Sterling Farms Golf Course in Stamford, Conn., in June. Like the Junior, this will allow a competitor (if eligible) to compete in the WGA Championship while attempting to qualify for the MGA Public Links Championship. The WGA Father & Son will follow a similar transition, with the Championship becoming a flight within the MGA Father & Son Championship. These changes allow competitors to pay one entry fee and allows eligible teams to have their score count toward both championships, while also assisting member clubs by reducing hosting requests.

“The MGA and WGA have been successful in serving golf for decades,” says MGA executive director Brian R. Mahoney. “Our groups have collaborated informally in the past, but we recognize the benefits of partnering officially to provide a more efficient delivery of services to our member clubs that generously host educational forums, training seminars, and fundraisers in addition to supporting our championships.”

Golfers will be required to be a member of a member club and have an MGA Handicap Index through the MGA/GHIN service to participate in any MGA or WGA championship. At this time, membership policies and related fees will remain in place for the WGA, except for the WGA Associate Membership for public golfers, which is being replaced with the MGA eClub membership.

Volunteers are at the core of the success for both organizations thanks to their dedication to fill roles in leadership, on committees, and as part of championship support. Combining volunteers under one umbrella will allow for improved training, better use of volunteer skill sets and coordinated efforts to enhance and expand programming.

“As an active member of the MGA Executive Committee and past president of the WGA, I was an early and enthusiastic proponent for having these two associations operate together," says Rob Bluestone, who also formerly chaired the MGA’s Rules and Competitions Committee. “Benefitting from the proficiency of MGA tournament administration, and their staff, resources, and volunteers, the WGA’s rich history will be preserved and we expect its future to be enhanced. This new organizational structure is only a positive for the local golf community.”

Not all WGA operations will be integrated with the MGA as a result of the collaboration. The Caddie Scholarship Fund will now operate as an independent organization.

For more information, please contact the MGA’s Championships Department at 914-347-4653.

About the MGA: The Metropolitan Golf Association was founded in 1897 and is one of the nation’s oldest and largest amateur golf associations representing more than 550 clubs in the tri-state Metropolitan Area. Through a network of more than 300 volunteers, and a full-time staff operating out of its Golf Central headquarters in Elmsford, N.Y., the Association fulfills its role as a true non-profit service organization. Through a variety of unique, relevant, and innovative services for member clubs and area golfers, the MGA has established itself as a leader among local and national golf organizations.