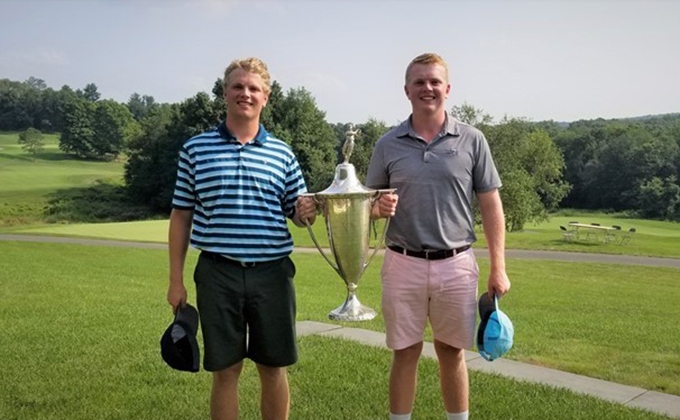 LINCOLNDALE, N.Y. (August 15, 2018) -- Nils and Bear Carlson had never played in a team event before, but they had a plan heading into Wednesday’s British Victory Cup at Anglebrook.

“I had played the day before at my home club (Bedford G&T) and hit it pretty well,” said Bear, the older brother. “So I told my brother ‘I just need you to make a few birdies, otherwise I’ve got us covered.’”

So the younger brother complied—at least until the second sudden death playoff when he buried a 30-foot eagle putt to bring the 93rd playing of the British Victory Cup to a thrilling conclusion.

Despite firing a gross 67 in the two-player team event, the Carlsons found themselves in a playoff with another set of brothers, Ryan and Dan Gabel. Seeing Anglebrook for the first time, the Carlsons realized early on that birdies weren’t going to be easy to come by—and that is some cases, neither were pars. Since they both average over 300 yards off the tee, that prodigious length provided a great advantage against the rest of the field.

“When we realized how much undulation there was on the greens,” said Nils, 19, who attends the University of Utah, “we knew it was time to start sticking our approaches tight—and we did. But we scrambled to save a lot pars.”

Ironically, the key to the victory may have come on Anglebrook’s 18th ranked handicap hole—No. 10, a par-5 playing 510 yards. Each of the Carlsons lost a tee ball to the right, but Bear managed to make an eagle off his second ball to save par.

“We loved the golf course—it’s all out there in front of you and all you need to do is hit the shots,” said Bear, who plays on the club team at the University of Virginia. “The superintendent and his team did a great job getting the course ready after all the rain we’ve had. The greens were fantastic and a lot of the players we talked to complimented the conditions.”

The brothers each called the victory their greatest thrill in golf to date. They learned the game from their father Tore, who has been a member at Bedford since before they were born and is a scratch golfer himself. While Dad doesn’t quite hit it as far as his two sons, they say he isn’t far behind either. Based on their showing at Anglebrook, it’s likely more tournament wins aren’t far off either.

The British Victory Cup trophy is three feet tall and holds the name of every champion dating back to the inaugural event in 1927.

The event honors four amateurs from our area—Willie Turnesa, Dick Chapman, Dick Siderowf and Jess Sweetster—who went over to the United Kingdom and won the British Amateur. The trophy bears the name of one of them, Sweetster, who himself won the event three times and was became the first American to win the British Amateur when he crossed the Atlantic with Bobby Jones, Francis Ouimet and several other great American amateurs to win at Muirfield in 1926.