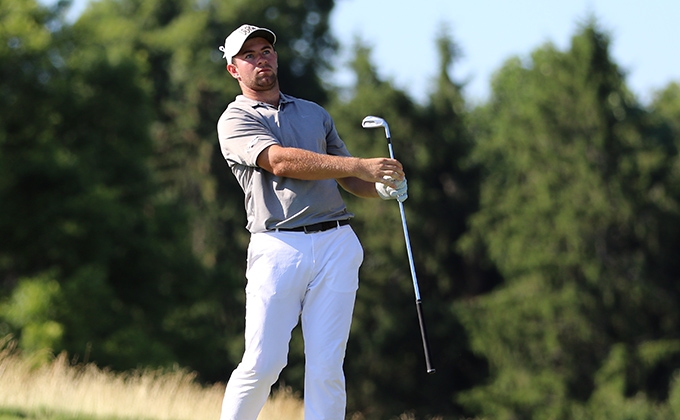 SCARSDALE, N.Y. (July 9, 2018) – Amateur Cameron Young of Sleepy Hollow and Rob Labritz of GlenArbor separated themselves from the field in the opening round of the 96th Westchester Open Championship Presented by Callaway, firing scores of 7-under 63 and 6-under 64, respectively, at Sunningdale Country Club on Monday.

David Pastore of Fairview posted 3-under 67 stands third on the leaderboard, while Adam Rainaud of Country Club of New Canaan, amateur Max Theodorakis of Ridgewood and past champions Danny Balin of Westchester and John Stoltz of Shawangunk all tallied 2-under 68s. Mike Ballo, Jr. of Winged Foot—the 2012 champion—recent U.S. Open competitor Cameron Wilson of Shorehaven and Casey Pyne of Stanwich all carded 1-under 69s to round out those posting red figures.

“I putted really nicely,” said the two-time All-ACC honoree Young, who will enter his senior year at Wake Forest next fall. “I made a bunch of birdie putts from four to eight feet and had a lot of really good chances.”

While the birdies (six of them) and eagle (par-five first) were nice, Young points to a par-save on the par-four fifth that kept him rolling through the end of the round. “I drove it in the left fescue then hacked it out into the front bunker,” he said. “I hit a nice bunker shot to about 3-4 feet and made that for par. That really kind of kept me going and I birdied the next hole.”

Playing at 6,700 yards, Sunningdale allows Young to use his distance to his advantage. “I had very short shots into some of the par fours—some of the shorter holes I had 40 yards and 50 yards in, so that was very helpful.”

Meanwhile, Labritz had his game reeling as well, reaching 8-under through 14. “I drove it well, then I hit a bunch of shots in there pretty tight,” said the 2016 Westchester Open champion. “The par-fives were reachable and then the only two bogeys I made were 17 and 18 and I didn’t really hit bad shots—it just happens. I played solid.”

For many players, this is the first time seeing Sunningdale since it completed course changes last season. Labritz says his prep work included a ride around the layout with assistant professional Brian Giordano last week, allowing him to develop a game plan.

Labritz birdied his first two holes and added two more before making the turn. He turned it on again heading to his final nine, carding four birdies in a five-hole span. “I didn’t know how many under I was,” said Labritz of his score mid-round. “I was just kind of grinding and playing.”

Balin, the reigning champion who’s aiming to capture the title for a fourth time, made his turn in 2-over, but rolled in four birdies on the way in to put himself back in the running.

“I haven’t really picked up a club in the last couple weeks since we got back from the national club pro,” said Balin, who qualified for the 2018 PGA Championship, of his slow start. “I’ve just been working hard and recently had a baby, so lots going on.”

Eight more players stand tied for 11th following rounds of even-par, including Mike Miller of Knollwood who’s also coming off an appearance in the U.S. Open at Shinnecock and several weeks on PGA TOUR Canada. “The scorecard probably doesn’t give it justice,” said Miller. “The bogeys were really just putting. I three-putted two and three, which kind of stinks. I got off to a decent start making birdie on one. I made one bad swing on 13, but other than that I just need to get the putter going—that’s been the story. I’ve been hitting it great.”

Following Monday’s opening round of play, a cut was made to the low 40 scores and ties, with 41 players continuing to Tuesday’s final 36 holes with scores of 2-over 72 or better.

The second round begins at 7:30 a.m., Tuesday, and will once again feature 9- and 18-hole updates. The third and final round then takes place in the afternoon with additional scoring updates throughout the round and updates on the WGA’s Twitter as well.