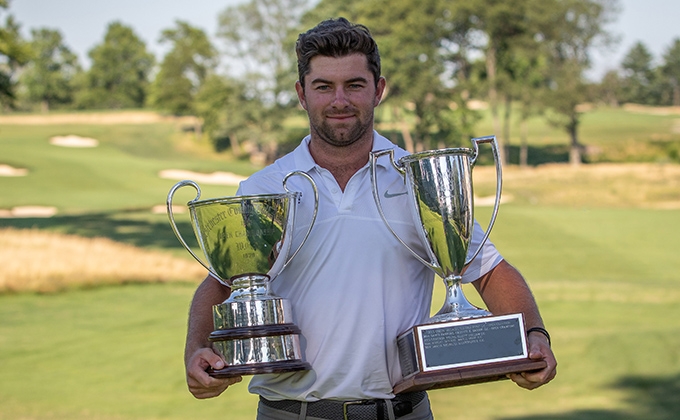 SCARSDALE, N.Y. (July 10, 2018) – A 7-under 29 on Sunningdale Country Club’s first nine all but sealed the deal for amateur Cameron Young of Sleepy Hollow Tuesday in the 96th Westchester Open Championship Presented by Callaway, as the 21-year-old closed with a 5-under 65 in the afternoon to take the title by seven shots.

Beginning the 36-hole day with a one-shot lead thanks to a course-record 63 on Monday, Young carded an even-par 70 Tuesday morning and gained two shots on the field. A hot putter led to a blistering start to his afternoon round, giving him more than enough breathing room and leading to the runaway victory.

“I think that start really set me up for the day,” said Young, the seventh amateur to claim the Westchester Open. “I knew I had a lead in the first place, and then to get out to a start like that and see the guys around me not really doing the same, that kind of gave me the confidence to just go and play the rest of the day and not really worry about what anyone else was doing.”

For Young, getting the putter to compliment his length off the tee led to his sizable margin of victory. “I putted really nicely—until the last couple holes—especially the front nine this second round today,” said the rising senior at Wake Forest who earned All-ACC and honorable mention All-American honors last season. “I made a bunch of putts from 15 to 20 feet. I made a couple for par this morning that were huge and I think that’s definitely what kept me in it all day.”

After holing lengthy putts on both Nos. 1 (for eagle) and 3, Young hit a three-wood just short of the 340-yard 4th and hit a quick-checking wedge to just a few feet. He converted the birdie to move to 4-under through four holes and extend his lead to five.

After a pair of pars, Young made a somewhat unconventional birdie on the 7th to get things rolling once again. Striking a tree with his drive, Young still had 286 yards into the green on the 510-yard par-five. But, a well-struck wood found the green and led to an easy two-putt birdie. A 20-footer from the collar of the par-three 8th and a 15-footer on the par-four 9th followed, leading to his stellar 7-under 29 and an eight-shot lead.

Even while entering the final round with his three-shot advantage, Young maintained an aggressive mindset knowing the quality competitors that stood behind him. “For me, I just try to keep hitting good shots and execute the same game plan I have,” said Young about his thoughts entering the final round. “I knew playing with Danny [Balin] that he might be the one that goes out in 29 and I go out in even. I just try to keep driving the ball well because that’s one of the keys for me. If I did that, I was going to have a lot of chances.”

A pair of three-putts down the stretch served as the only miscues on Young’s afternoon card, but still allowed the 2017 New York State Open titlist to add his name to another trophy.

“It’s very special,” said Young. “I’ve played in this event a bunch of times and my father has played numerous times. To see some of the names that are on that trophy—what those guys have done, it’s very special to be a part of.”

Past champion David Pastore of Fairview—also a winner as an amateur—finished as the only player with three rounds in the 60s (67-69-69) and earned the $7,200 top prize as low professional at 5-under 205. Amateur Ryan Rodriguez of Mansion Ridge fired 4-under 66 in the final round to finish tied for third alongside Casey Pyne of Stanwich, while past champions Danny Balin of Westchester Country Club and John Stoltz of Shawangunk finished tied fifth overall at 2-under 208. Rob Labritz of GlenArbor—yet another past champion—and Cameron Wilson of Shorehaven, who made the cut at last month’s U.S. Open, finished at 1-under to round out those finishing in red figures for the championship.

Sunningdale served as a superb host for the championship, providing an incredible test for the region’s top players. Originally designed by Seth Raynor—and touched through the years by golf architecture greats Walter Travis and A.W. Tillinghast—Sunningdale recently completed a modernization of its course in 2016 under the direction of Mike DeVries. Players raved about the updates to the layout and faced impeccable conditions even amidst 90-plus-degree days.

The 41 players that made the 18-hole cut are exempt into the 97th Westchester Open, which will be contested at Country Club of Darien.