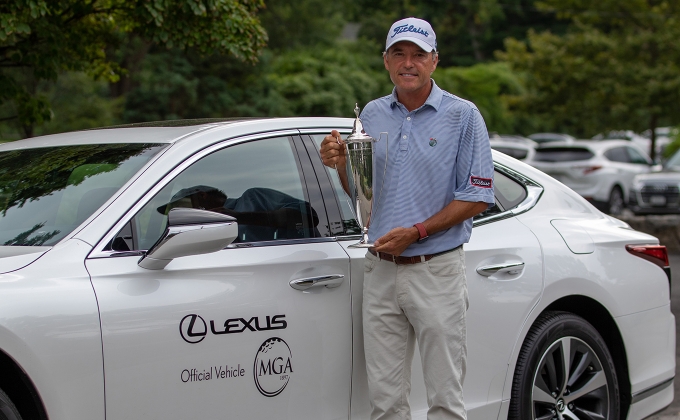 PELHAM, N.Y. (August 16, 2021) -- A torrid 5-under-par start over the first six holes led the Golf Club of Purchase's Carl Alexander to a three-stroke victory in the inaugural Westchester Senior Open Championship Presented by Lexus, Monday at Pelham Country Club. The victory netted Alexander the $2,000 winner's share and earned him his second Open victory with the Westchester Golf Association, having won the Westchester Open in 2000.

Despite being up at 4:30 a.m., Alexander still hadn't hit a golf ball until his first tee shot at Pelham since work duties called as his club was hosting its first day of a four-day AJGA tournament. But, having played well so far this season, Alexander's confidence in his game and recent preparations served him well as he began with a birdie on the first.

"It took a little bit of mental fortitude to just convince myself that the prep work was there, otherwise I was fine," said Alexander. "But, it was a different kind of morning for me."

From there, Alexander made a good lag putt on the second, a solid par on the third and then got up-and-down from a greenside bunker on the drivable par-4 fourth to move to 2-under.

"I was feeling pretty good, I had it under par," said Alexander. "I went to the next hole [the par-5 fifth] and decided to lay up to a good number. I had 80 yards and hit a beautiful little wedge shot that hit behind the hole and spun back. When it fell in, I knew I was on a roll at that point. Then I made another birdie on the next hole, so I had a good little stretch, knew I was deep under par and just started telling myself this is why I'm here."

Though Alexander added a double-bogey on the par-4 eighth hole and tallied back-to-back bogeys on Nos. 14-15, the 55-year-old bounced back in both cases, answering with immediate birdies.

"My bounceback this year has been really good," said Alexander. "Playing 18 holes of golf is really hard and staying focused and concentrating for every shot is really hard. So, sometimes I make a bogey and it wakes me back up and I birdie the next hole. It meant a lot though, because I knew I was moving back in the right direction."

Though several players crept up to 2-under through the round, the birdie on the par-5 16th and a pair of closing pars solidified Alexander's place atop the leaderboard.

Alexander has performed well this season, including finishing in a tie for 10th at the Westchester Open.

"The strength of my game this year, no doubt, has been my mental game. I'm going in there with a much better attitude and much better perspective about what golf means to me at 55 years old, what it means just to go out and enjoy myself and have fun. I'm out here having a great time regardless of what I score. I'm grateful that we have the fact that we have the opportunity to play great golf courses with good people."

Rob Labritz of GlenArbor, this year's Westchester Open winner, finished tied second alongside Craig Thomas of Metropolis, both turning in 1-under 70s. Labritz also had an eagle on his card, taking advantage of the short par-4 fourth. Michael Laudien of Rotella, who competed in the U.S. Senior Open earlier this summer, and David Schuster of Sleepy Hollow rounded out the top-five, finishing at even-par 71.

Through a match of cards, Richard Kelsey of Old Oaks captured low amateur honors, as he and Darren Johnston of Rye both carded 3-over 74s.

This was the first championship event staged at Pelham Country Club since its renovation completed in 2020. As part of the Club's master plan, the renovation completely overhauled five holes, drastically improving environmental sustainability efforts and rerouting much of the course's layout. Alexander's 4-under matched the new layout's course record. Whether comparing their round to previous experience or seeing the course for the first time, players were enthusiastic about the round and the course's outstanding conditioning.