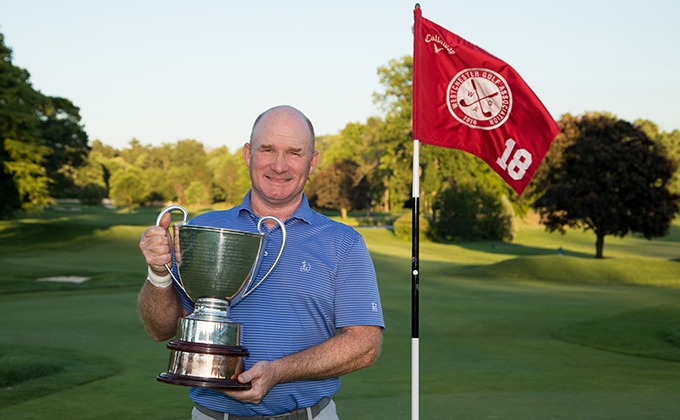 DARIEN, Conn. (June 11, 2019) -- It took extra holes to decide a victor in the 97th Westchester Open Championship Presented by Callaway, Tuesday at Country Club of Darien, as past champions Frank Bensel of Century and Greg Bisconti of The Saint Andrews Golf Club finished the 54-hole championship at 1-under 212. Bensel made quick work of the sudden-death playoff though, carding birdie on the par-five 18th hole to clinch the come-from-behind victory and etch his name on the trophy for the second time in his career (2004).

Bensel began the day five shots behind Bisconti following an opening round 74 on Monday--a day that featured a one-hour, twenty-five minute suspension of play due to heavy rains and saturated course conditions. Though Bensel fired a 2-under 69 in the second round on Tuesday morning, he still lost a shot to Bisconti who carded a 3-under 68 and took a six-shot lead over five players into the final round.

"I just wanted to go out and play a really good round," said Bensel of his approach entering the final round, knowing where he stood. "You just play one shot at a time, one hole at a time."

Bisconti gave back three shots early in the final round, letting Bensel and a large group of players back into the mix. Bensel rose to the occasion among the contenders, carding his second 69 of the day in the afternoon, with a highlight hole-out eagle coming on the par-four 7th and back-to-back birdies coming on Nos. 15-16.

"The conditions were incredibly hard," said Bensel. "The course really held up. The wind was very strong today and was kind of swirling, so it was tough to manage the wind. The ball-striking was important and the greens are really tough too, so it really required all components of your game kind of clicking at the same time."

Frank Bensel gives his perspective on what it means to win his second Westchester Open (2004, 2019) presented by @CallawayGolf.

Bensel entered the season playing quality golf, having won the PGA Stroke Play Championship over the winter in Florida, but hadn't had the results he'd been looking for this spring. But, entering a championship he enjoys at a course he was familiar with brought his game to form. "It's a tournament I love competing in," said Bensel. "I grew up in Westchester, it's always had great venues and I've had many good finishes, but this is the second time I've won it, so it feels good."

David Schuster of Sleepy Hollow took solo third, finishing at even-par behind rounds of 73-70-70, while Rob Labritz of GlenArbor and Cameron Wilson posted 1-over 214s to tie for fourth place. All players making the 40-and-ties cut following the first round are exempt into the 98th Westchester Open, which will take place at The Apawamis Club in Rye, N.Y.

Despite steady rains throughout Monday and into Tuesday morning, Country Club of Darien shined as host of the 97th Westchester Open Championship--one event in a string of hosting duties the club has for the upcoming years. The club has garnered much-deserved attention following a redesign by Dr. Michael Hurdzan, whose work earned the club "Renovation of the Year" by Golf, Inc., in 2010, and established the layout among the top in the region.