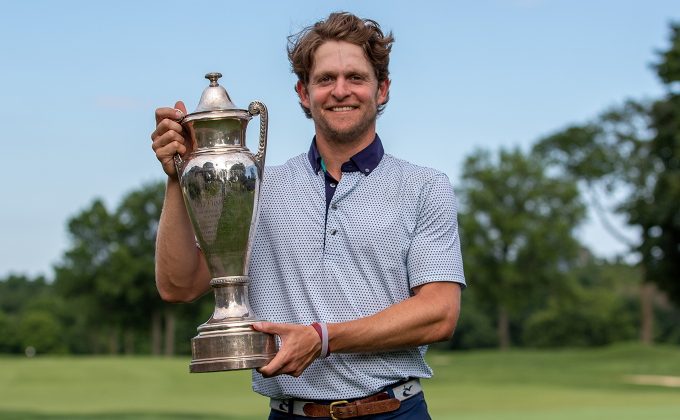 WHITE PLAINS, N.Y. (July 7, 2022) – While Alex Gu charged back from a four-hole deficit to tie the championship match for the 103rd Westchester Amateur, Ryan Coughlin of Westchester Country Club closed down the stretch to take the title with a 2-up victory.

Coughlin, 32, built a 4-up lead through the opening 14 holes before finishing the morning 18 with a 3-up advantage.

In the afternoon, Coughlin led 4-up again through 23 holes, but several miscues left the door open for the 19-year-old Gu.

“I thought I could have squeezed out a few more in the afternoon, but he was battling and I knew it wasn’t going to be easy,” said Coughlin. “I made a few mistakes and he took advantage, he’s a super solid, steady player.”

After three consecutive ties, Coughlin then took advantage of a Gu miscue as a wayward drive on the par-4 14th led to a lost ball. That started a string of back-and-forth wins, with Gu winning the par-3 15th as Coughlin’s shot from a front greenside bunker skipped over the green and Gu held a good birdie look. Coughlin then reclaimed the lead with a birdie four on the 16th.

Both birdied the par-4 17th that was playing drivable, with Coughlin getting up and down from the rough just short of the green and Gu doing so from a collection area to the right of the front hole location.

Coughlin’s par on the 18th won him the hole and led to the 2-up victory.

“I just think I put myself in the right spots,” said Coughlin of his play down the stretch. “Even though I missed fairways, I kept myself in play.”

In addition to some strong putting especially over the first two days, Coughlin says some more maturity in his game helped him capture the title.

“It’s really just been about staying calm and confident compared to when I was younger,” he remarked. “This is great. I love match play. This course was awesome. The conditions were awesome, and it was just a great tournament to stack up against some great local ams.”

Meanwhile, Ken Cohen of Villa Roma earned a 1-up victory over Tore Carlson of Bedford Golf & Tennis Club in the Senior Divison.

“In these matches, you just have to be patient,” said Cohen, who trailed by two shots through four holes but won five of the next six holes to quickly gain a 3-up advantage. “I just felt like I was playing well the whole week. I just kept saying, ‘keep hitting your shots, keep swinging.’ I was driving it really well and in match play that puts a lot of pressure on your opponent.”

While Carlson trimmed the lead to just one on two more occasions, Cohen held on down the stretch to secure the victory.

“For me it just feels really good. I couldn’t play for a whole year when I turned 55,” said Cohen, now 59 and sharing that he had battled prostate cancer. “I’ve gradually been getting back to where I feel good about my game.”

In the Super Senior Divison, Rick Blank defended his title and his home turf at Metropolis to claim the victory for a third time.

“The tees were up a little bit further than what I play, so the course was a little different for me and I had to tee off with different clubs,” said Blank. “I hit the ball very solid all day.”

While his opponent Jeff Reissman of Hollow Brook won the second hole, Blank wouldn’t surrender another hole the rest of the way. He found his groove and won 8 of the next 10 holes, including a closing four straight on Nos. 10-13 en route to the 6-and-5 victory.

“I hit a lot of very solid irons and hit a lot of greens,” said Blank, 71. “I only missed one green and I think that probably put a little extra pressure on him. I don’t make that many birdies, but I find fairways and greens.”

“It’s very nice to still be able to play at this level. I really enjoyed being here.”

All week the field raved about Metropolis Country Club and it’s immaculate conditioning, especially the smooth-rolling greens. The club was hosting its eight Westchester Amateur Championship.