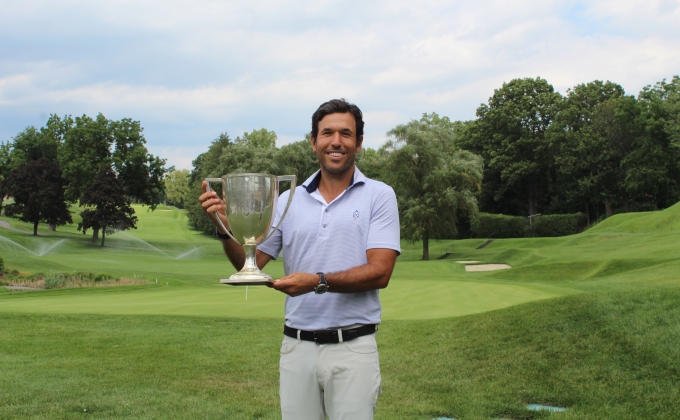 PLANDOME, N.Y. (August 9, 2022) – Darin Goldstein of Deepdale Golf Club finished two shots clear of the field to capture the 2022 Long Island Mid-Amateur Championship presented by Big Sky Opportunities Fund at Plandome Country Club. Ryan Hom of North Hempstead Country Club shot even-par 142 for the two days and Colin Dolph of Nassau Country Club came in at 1-over 143 to finish second and third, respectively. Goldstein carded four birdies on the back nine en route to a second round even-par 71, securing the victory with a total score of 2-under 140.

Goldstein started off the day steady, making all pars until a double bogey on the ninth. Following that hole, he was able to turn things around on the back nine, which allowed him to re-take the lead.

“I was in control until the middle of the fairway on nine, I spun back a wedge and ended up with a really tricky, eight-foot putt and ended up making a mess of that, so I dropped back into the field," Goldstein explained. "Then, I drove it up to the green on 10 and ended up with a funky lie where I was standing half in the bunker half out so I didn’t really get the opportunity to get the look I wanted. I hit two of the best shots of the day on 11 and 12. I hit two close irons, which gave me some breathing room. The wheels came back off a little, but I think the most important putt happened when I had about a 30-footer for par on hole 13, which sort of settled the round.”

Goldstein drained a three footer for birdie on the 18th hole to claim his second career LI Mid-Amateur win. When asked about the hot weather conditions over the course of the past two days, Goldstein believes he handled it pretty well.

“It was a grind out there, just had to fill up the bag every couple holes with water to stay hydrated. Honestly, the heat doesn't bother me. It's more about how the heat affects the ball, the course; mirroring that the balls going a little bit further depending on the lie.”

Goldstein last won this event back in 2013 at Cold Spring Harbor.

“I’m very excited. This has been a bit of a bizarre summer, I actually had knee surgery six weeks ago so this is sort of my first two weeks back," Goldstein said when asked about now being a two-time champion of this event. "It's great to get my name back on this trophy after all these years.”