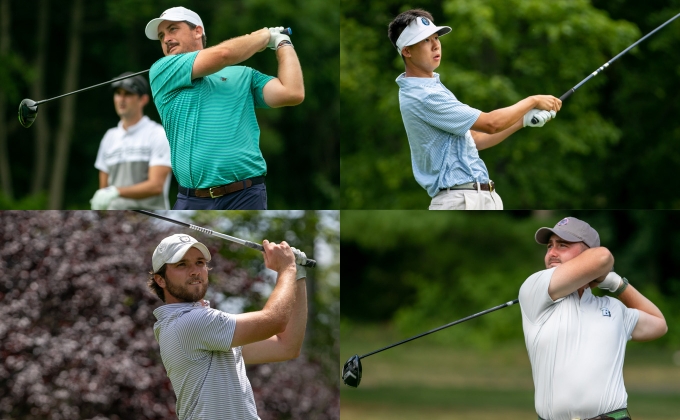 ELMSFORD, N.Y. (July 7, 2020) -- Brad Tilley of Sleepy Hollow and James McHugh of GlenArbor placed themselves in familiar position Tuesday after claiming a pair of victories to advance to the semifinal round of the 101st Westchester Amateur Championship at Knollwood Country Club. Tilley claimed the title in 2005 and returned to the final in 2017 upon regaining his amateur status, while McHugh is making his second straight and third career semifinal appearance in the championship.

Justin Lane of Woodstock makes for a third player in the semis that has match play experience in the Westchester Amateur, having advanced to the quarterfinal round last year at Winged Foot. MGA eClub - Hudson Valley member Nathan Han, a two-time MGA Boys champion, rounds out the quartet of competitors aiming to claim the Paul Adler Trophy.

While Mark Mumford dropped his quarterfinal match to Han, Mumford provided the morning highlight. The Westchester Country Club member faced a five-hole deficit early against three-time reigning champion Christian Cavaliere of Mahopac, but rallied by making four birdies on the way in en route to a 3-and-1 victory. Stephen Walsh and Luke Sample, both MGA eClub - NYC members, combined for nine birdies in a tightly contested morning match in which Walsh won in 20 holes. Lane defeated Walsh in the afternoon to secure his spot in the semifinals.

Tilley is aiming to continue a strong start to the season, having advanced to the semifinals of the Connecticut Amateur just a couple of weeks ago. He's also building momentum from an incredible fall in which he won the NYSGA, WGA and MGA Mid-Amateur titles in a span of 10 days.

Though just 21 years old, McHugh is a more than familiar name in the championship, having made match play every year since 2016 and having made his first run to the semifinal round in 2013 at the age of 14.

HOW THEY GOT THERE