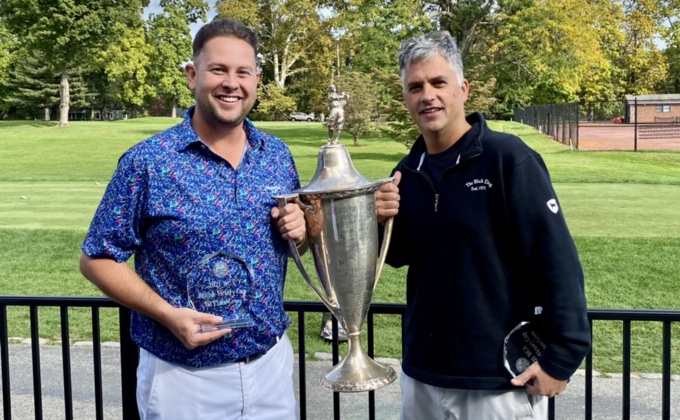 NEWBURGH, N.Y. (October 14, 2021) -- Patrick Mainey and Sean McNally took home first place in the 95th British Victory Cup at their home course, The Powelton Club. They finished with a 7-under-par round of 63. McNally, the Powelton Club club champion, was able to lock up the victory with a clutch up and down for par on the 18th hole.

Mainey credited his partner for closing the tournament out. “Sean hit a great shot on 17 that almost went in which really kind’ve like sealed it for us...we came into 18 and lo and behold my ball disappeared. Sean was up against the wall of the bunker and made a great up and down, so, it was Seanie the whole way in,” Mainey said.

The duo complimented each other well the whole round, avoiding any bogeys until the 13th hole. Their best stretch came through the turn on holes 8-12, making birdies on 4 out of 5 holes.

Mainey and McNally are familiar with each other’s games as they went down to the wire in the Powelton Club Championship this year. They said that they didn’t have to adjust much coming into the tournament.

“We just still try to beat each other’s heads in. We didn’t play great, it was a lot of missed putts,” Mainey said. “I kept us in it as long as I could and he brought it home.”