Meizoso and Millman Win Sands in a Playoff

Meizoso and Millman Win Sands in a Playoff 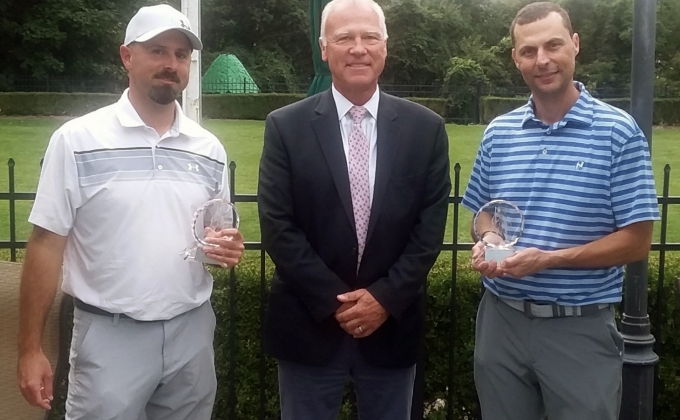 GLENWOOD LANDING, N.Y. (October 5, 2020) -  The team of Frank Meizoso and Jonathan Millman, both representing MGA eClub - Long Island, were winners of the Championship division of the Sands Memorial Four-Ball Invitational sponsored by the Whitmore Group at North Shore Country Club on October 5th.

Meizoso and Millman found themselves headed to a sudden-death playoff with Ryan Hom and Sung Cho, after both teams recorded scores of 3-under 68. The two teams took very different routes to their 3-under finishes. Hom/Cho played steady golf all round long, recording four birdies and only one bogey while Meizoso/Millman's round featured eight birdies, three bogies, and one double bogey on the Par 4 third hole.  It took a two-putt par on the first playoff hole, North Shore's Par 3 tenth hole, for Meizoso and Millman to get the job done and claim victory.

In the Net Division, Garth Snow and John Glavinic of North Shore won with a net 9-under after a match of cards with Hom and Cho. Tom Roden and James Duncan of Bethpage and MGA eClub - Long Island finished a few shots behind with a net 6-under 65.

In the Senior Division, another playoff was needed to determine the winners. Mark Kitaeff and Jerry Liss of Lake Success defeated David Mattana and Jon Doppelt of Fresh Meadow on the second playoff hole for the title. Both teams had scores of 4-under 67 on the day.

Joe Arnold and James Smith of Colonial Springs and Lawrence were the Senior Net winners with a score of 8-under 63.