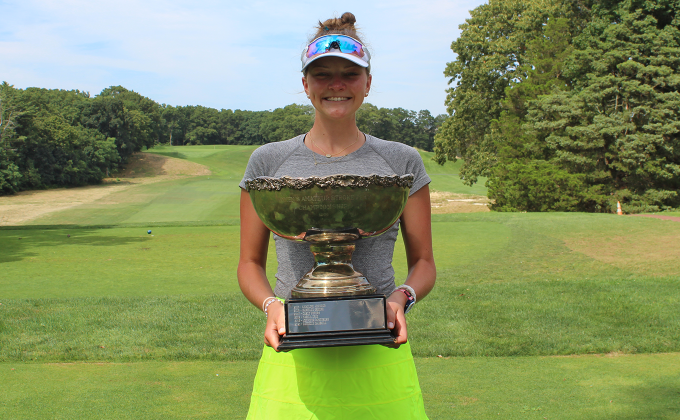 BETHPAGE, N.Y. (August 10, 2022) - Day two of the 2022 Long Island Women's Amateur Stroke Play Championship came to a close at the Red Course at Bethpage State Park, Thursday, with Caraline Oakley of Southampton finishing the day atop the leade board with an impressive two-day score of 5-under 145. Paige Diecidue of Smithtown Landing finished in second, carding an even-par 150.

Oakley sat atop the leaderboard by one shot entering Thursday’s round following her even-par 75 and she continued to pull ahead from the rest of the field in the final round. She finished the round 5-under 70 and had an impressive overall score of 5-under 154. Oakley made five birdies and carded an eagle on No. 11 that helped her secure the victory by five strokes. Oakley felt one particular aspect of her game, her short game, allowed her to succeed these past two days.

Oakley, a member of the Washington University in St. Louis golf team, felt really good about this win going into her junior year.

“It is so exciting," she said. "I got a surgery in the fall that set me back for the year so coming into the summer and getting this win was really exciting.”

Last year's MGA/WMGA Women's Met Amateur champion Diecidue turned in a sub-par score of her own on the final day with a 1-under 74, but it wouldn't be enough to keep up with Oakley. Diecidue took solo second, while Eliza Dana of Maidstone (4-over 154), Deanna Confessore of Hamlet (5-over 155) and MGA eClub - Long Island members Anongrak Baffi and Lucy Lamb (13-over 163) rounded out the top five finishers.

Donna Strong of the LPGA Amateur Golf Association claimed the net title in the championship division with a 4-under 146.