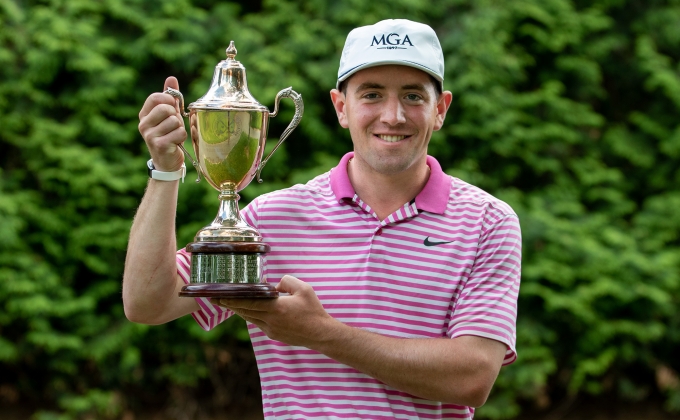 Playing the course for the first time, Stauderman used an aggressive approach in his attack. "I was kind of aggressive, especially in the beginning," said Stauderman, who just finished his junior year at St. Bonaventure. "I had never played this course so I didn't really know where the trouble was. I was hitting it good enough where I was confident."

Stauderman was 1-over through five holes, but quickly turned things around by holing out for eagle. Normally a par-five, the sixth tee was moved forward for the round and played as a 410-yard par-4. "I hit a good drive out there and had 103 to the pin," said Stauderman. "I hit a sand wedge. It's straight up hill and I thought, 'oh, it's pretty good.' I was hoping it was pretty close." Reaching the elevated green, one of his fellow competitors exclaimed it was in the hole.

Not having to putt was an admitted relief for Stauderman, who put a new putter in the bag last week. "I needed to change something with my putting because my putting was so bad," he explained. "I didn't make a ton of long putts, but I made a lot of the putts I needed to make today."

After making the turn in even-par 35, Stauderman added two bogeys and two birdies on the card on the way in, with his birdie on the par-5 18th securing the three-shot win.

While Stauderman was excited to claim the WGA Public Links Championship, he's now looking forward to teeing it up in the 73rd MGA Public Links Championship. "I was really disappointed last year when we didn't get to try to qualify for [the tournament] and play there," he said, referencing the cancellation of the event due to the COVID-19 pandemic. "I've never played Pound Ridge, but I've just heard amazing things about it. So, I said I have to make sure I play well today and get into that tournament because I really want to play that course. Now I'm excited to get out there."