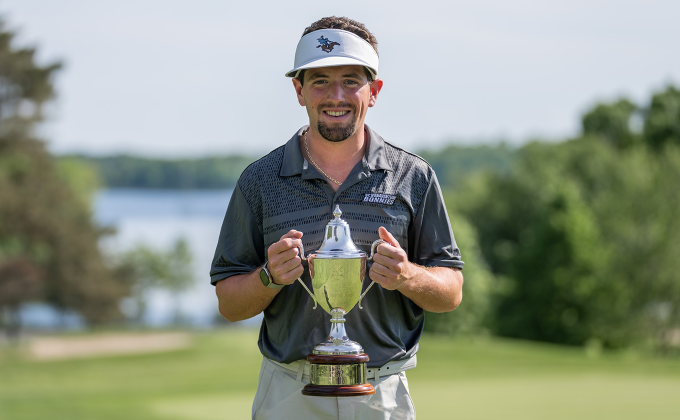 PEARL RIVER, N.Y. (May 18, 2022) – Four birdies and no bogeys over the final nine holes propelled Erik Stauderman of Casperkill to a 2-under 70 and a successful title defense in the Westchester Public Links Championship, Wednesday at Blue Hill Golf Course.

Players were also vying for qualifying spots in the 74th MGA Public Links Championship, with Stauderman leading 12 qualifiers to Rock Spring Golf Club for the event slated for June 16.

“I was going in a little rusty,” said Stauderman, who recently graduated from St. Bonaventure University. “I hadn’t really touched a club, to be honest, in a couple weeks. I started a little shaky but started getting it going.”

Stauderman noted up and downs for bogey on Nos. 1 and 9 proved critical to his round.

“You can get away with a bogey, because you can get it right back with a birdie, but doubles are tough to come back from,” he said.

He made the turn in 2-over with four bogeys to just two birdies, but cleaned it up on the back, making back-to-back birdies on Nos. 11-12 and 15-16 while keeping his card clean the rest of the way.

“I kind of got it going on the back,” said Stauderman. “I was hitting some good drives, which is big on that course because it’s so tight, and was putting myself in good position.”

For Stauderman, he’s hoping the victory kickstarts a good summer of competition, for which he has a full schedule planned between WGA, MGA and NYSGA events.

“It’s always great—it doesn’t matter what the tournament is—to get a win and get yourself playing good and get some confidence going forward,” he said. “It’s definitely a confidence booster for me and hopefully I can keep playing well this summer.”

“I’m excited to get out there and hopefully contend,” he remarked.

In all, 12 players advanced to the 74th MGA Public Links Championship with scores of 3-over 75 or better. Michael Bernacchia of YAGA turned in the only other sub-par round with his 1-under 71.