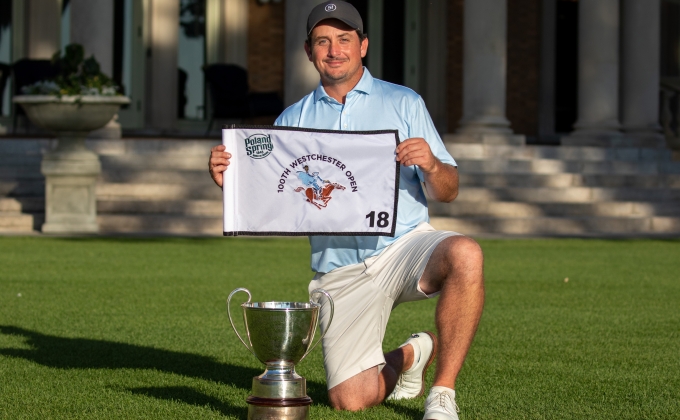 SCARBOROUGH, N.Y. (June 14, 2022) – Rounds of 5-under 65 and 1-under 69 on Tuesday led amateur Brad Tilley to capture the historic 100th Westchester Open Championship at his home club of Sleepy Hollow Country Club, as the 39-year-old finished with a 10-under-par 200 tournament total for the two-shot victory.

Amateurs took the top three spots, as Tilley outdueled Christian Cavaliere (8-under 202) of Mahopac in the afternoon’s final round and Nathan Han of Salem finished the championship at 5-under 205. Mike Ballo Jr. of Westchester took home the top prize of $7,200 as the low professional at 3-under 207 after a closing 5-under 65 on Tuesday afternoon.

“I just tried to make as many birdies as I could and stay patient,” said Tilley about heading into Tuesday’s final 36 holes four shots of Cavaliere, who set the pace on Monday with an outstanding 8-under 62.

Tilley used a 5-under 65 in the morning to trim two shots off Cavaliere’s lead.

“In the afternoon the wind kicked up and was going to be tougher, so it was great to get the hot start and shoot the 65,” said Tilley, who is also a two-time Westchester Amateur champion and past Westchester Mid-Am champion.

In the afternoon, a pair of bogeys from Cavaliere on Nos. three and four left the two tied at 9-under overall and set up an exciting afternoon golf.

Cavaliere bounced back with a pair of birdies, but also had two more bogeys on the front, while Tilley remained steady and kept a clean card over the first nine holes by making several outstanding up and downs.

“My short game has always been a strength. I don’t like to have to lean on it, but sometimes you do,” said Tilley, the seventh amateur to win the Westchester Open and the first to do so since Sleepy Hollow’s Cameron Young did so in 2018.

“When I was in trouble, I almost holed chips and bunker shots,” Tilley said, noting that he had some good birdie looks as well over the first nine holes but couldn’t get any to fall. “I knew at some point something was going to go in, and the back nine was fun.”

Tilley was right, with a birdie putt dropping on the par-4 11th, with his ball firmly striking the middle of the flagstick and dropping on a sweeping putt from outside of 35 feet. Not to be outdone, Cavaliere dropped his own birdie from around 20 feet.

On the par-5 12th, Tilley pulled his approach with a wood into high fescue and left himself a chip for his fourth that ran to the collar of the green. He holed another one, making the 15-footer for par to remain tied with Cavaliere.

The fireworks continued on the par-4 13th as the pair made birdies, with Cavaliere once again matching Tilley making the first attempt.

“Going back and forth with birdies, making putts, and forcing someone to make one on top of you and him making it on top of you—we’re giving each other fist bumps, having a good time out there,” said Tilley. “That’s what you want to do on the back nine. Juices were flowing, we were both in the zone and it was a lot of fun.”

While Han made back-to-back birdies on Nos. 12 and 13 to get to 9-under, he fell off the pace down the stretch to keep it a race between Cavaliere and Tilley, who traded bogeys on Nos. 14 and 15 to enter the final holes tied at 10-under.

Tilley got up-and-down on the signature par-3 16th after his tee shot just ran through the green while Cavaliere two-putted from the middle of the thumbprint.

Cavaliere’s drive on the par-4 17th placed him behind a tree on the left, with his recovery attempt finding a bunker short of the green. His third came up well short of a back hole location and a three-putt left Tilley with a two-shot lead heading toward the clubhouse.

A two-putt par sealed the deal for Tilley, earning him the meaningful victory.

“I’ve played Stoddard Trophy here and Met Open here, and I think I put a little too much pressure on myself those times,” he said. “I learned from those experiences. I took the caddie I always take and he’s a great caddie—Chris McNeil—and I tried to make it as normal as possible. To win the Westchester Open anywhere would be special anywhere. To do it in the 100th at my home course, at a place where I got married and I grew up, there’s nothing more special than that.”

Sleepy Hollow served as an outstanding host for the 100th Westchester Open Championship Presented by Poland Spring--the fourth Westchester Open hosted by the club. While overnight rains prior to Monday's opening round softened the course, it began to get firm and fast and showed it's truest test by championship's end. The layout has received well-deserved high praise ever since its recent Gil Hanse restoration, rising to No. 36 in the latest GOLF ranking of top-100 courses in the United States.