Road to the Majors: Q & A with Liberty National's Dan Schleichert

Road to the Majors: Q & A with Liberty National's Dan Schleichert 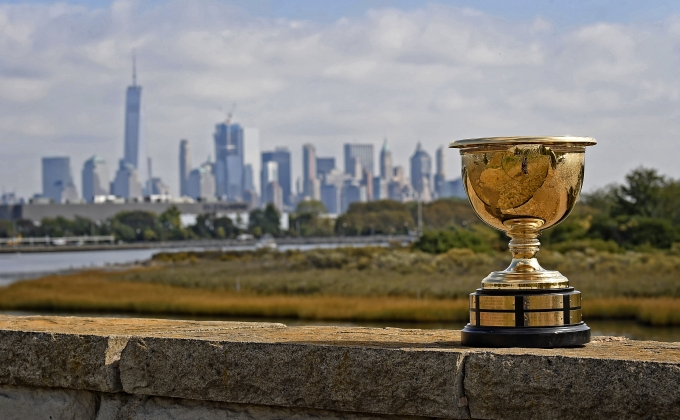 As a part of the MGA's Road to the Majors Series Presented by Rolex, we interviewed Dan Schleichert, Head Professional at Liberty National, about the upcoming Presidents Cup.

Met Golfer: What is everyone at Liberty National looking forward to most about hosting the Presidents Cup?

Schleichert: First and foremost being on golf’s biggest stage.  The Presidents Cup is a worldwide event that at its core, is meant to grow the game of golf.  Showcasing the best players in the world on an incredible championship golf course and a background unlike any other in golf, we think this Presidents Cup has an opportunity to be an extremely memorable and meaningful event.  I think our Members will enjoy seeing the golf course on display, and watching how 24 of the best players in the world play it.

Met Golfer: Do you notice any differences in preparations for the Presidents Cup compared to when the club hosted The Northern Trust in 2009 and 2013?

DS: The overall fan experience will be greatly enhanced.  In addition to many features on site, there will be a Presidents Cup fan experience taking place at the Oculus at the World Trade Center Tuesday-Sunday.  This fan experience will touch hundreds of thousands of people throughout the week.  There will be live coverage of the tournament, the ability to buy Presidents Cup merchandise and a number of interactive events to bring people closer to the event.  The goal is to reach as many people as possible and bring the Presidents Cup experience to them.  Relating to the golf course, players will be using an expanded practice tee on the opposite side of our range for the Presidents Cup.  They will be looking right at the New York City skyline as they prepare to represent their country.  The practice area is in close proximity to our 5th hole which will serve as the starting hole for the Presidents Cup.  It will be a truly amazing atmosphere.

Met Golfer: What has the timeline been for setup of grandstands, media center, concessions, etc.?

DS: The set up or hospitality venues and grandstands on the golf course has multiplied for the Presidents Cup compared to the past two Northern Trust events.  They began building in early June, it will take about a month longer than the Northern Trust.  It shows the significance of this event and the thought and detail required to create this unique stage for the best players in the world to compete.

Met Golfer: For fans attending the Presidents Cup, what are a couple holes that may provide the most excitement?

DS: Without question, #12 is the ultimate risk reward hole.  This drivable par 4 can play anywhere from 285 yards to 325 yards.  This multi-tiered green has a water hazard guarding the right side and a sharp run off and difficult bunker guarding the left.  This hole could be a pivotal point and affect the momentum of a match.  Each of the last four greens (holes 15-18) are within 250 yards of one another.  The amount of people concentrated in one area and the excitement of matches being won or lost could be an incredible experience.

Met Golfer: In what ways will the course cater well to the match play format?

DS: Liberty National is an excellent venue for match play.  The golf course rewards quality shots with birdie opportunities but also magnifies mistakes.  We anticipate holes being both won and lost.  The golf course has a lot of variety, many holes can be altered and set up differently from day to day to create a great a truly exciting competition.

Met Golfer: What are your thoughts on the alternate routing for the Presidents Cup, with play beginning on what is traditionally the fifth hole at Liberty National?

DS: I think play beginning on our 5th hole is going to be a homerun.  It will be an exciting and challenging tee shot with water down the entire left side of the hole.  With this alternate routing two of the final four holes will be par 3’s.  Again, the proximity of these four greens could provide incredible drama and excitement especially if the outcome of the Presidents Cup comes down to the final singles matches on Sunday.

Met Golfer: What does it mean to have Liberty National represent the Met Area on the world stage in hosting the President’s Cup?

DS: Liberty National is a venue unlike any other.  We anticipate the significance of Lady Liberty, the incredible backdrop of the New York Skyline and the history of millions of immigrants making their way in the hopes of freedom and opportunity will provide an increased sense of patriotism and camaraderie, not only amongst the US and International Team members but also the 25,000 expected fans each day.  We believe it will be a historic and significant week that stretches far beyond the game of golf.

Read Game On! from the August/September 2017 Met Golfer.