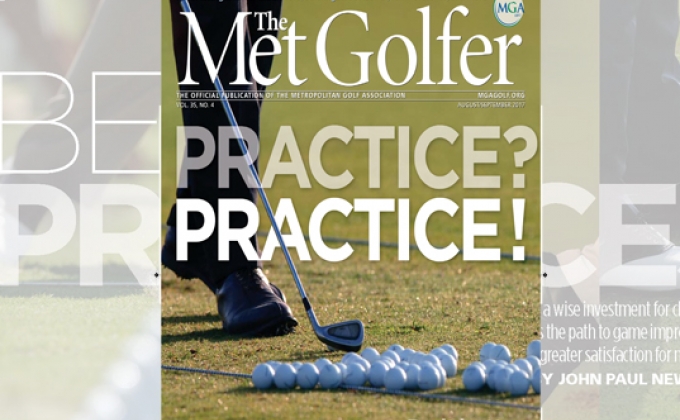 Anyone who plays golf has a favorite course, a singular lasting memory, a playing partner who makes the round special.  Author Tripp Bowen celebrates each of these and more in "All The Memorable Rounds" (Skyhorse Publishing, $24.99).

He learned the game as a child, became the first full-time Caucasian caddy at Augusta National Golf Club, played there numerous times, and also played at such bucket-list courses as Cypress Point and Pinehurst #2. Bowen tells stories about his golf life experiences, but wisely includes others who have deep personal stories about their own memorable rounds.

There's the decades-later first-person account of a junior golfer's dream victory at the North & South Junior Championship held at Pinehurst, juxtaposed with one about an Englishman's improbable win of the Senior Men's Club Championship at his adopted U.S. golf club -- where the victor gets to ride on the club's mascot, a bull named Titleist. (Photo included.)

A more touching story is about the heroic struggle of a young boy who had a picture perfect golf swing, but at the tender age of 8 found himself in a cancer ward facing the possibility of death and never again swinging a golf club.  His father, to ease the sadness of his two brothers and the burden of their vigil, takes the siblings to a golf course near the hospital; the three of them play, hoping one day to tee it up as a foursome.  Happily, the young man survives and the family returns to the golf course months later.

The author, a Georgian, writes in a breezy and relaxed manner, and many of the other contributors seem to have the same style.  The consuming emotion throughout is the passion and love demonstrated for the game of golf by unlikely and average players as well as a few who are more accomplished including Bowen and his 2-handicap father.  The chapter on their sunrise round at Cypress Point is magical and will resonate with every parent-child twosome fortunate to have put a peg in the ground together.

With all the recent controversies surrounding the Rules of Golf, a new book by MGA Rules and Competition committeeman Howard J. Meditz is quite timely.  "How to Love the Rules of Golf" (Applied Ink Press, $11.99) thoroughly examines and explains the 34 Rules of Golf and dozens of thorny issues found in the hefty sister book, "Decisions of the Rules of Golf."

Meditz, by his own description, is an average amateur golfer, but when it comes to his knowledge of the Rules and how to interpret and apply them, he holds the highest level of rating awarded by the USGA and the PGA of America.  A serious student of these Rules, he traces them to their Scottish origins dating to 1744, and offers an informative overview as to how the original 13 and the additional 21 have endured and been modified when necessary.

Meditz acknowledges that golf's rules are baffling and complicated. Nevertheless, his book is a strong advocate for the way the USGA and R&A have continued to safeguard a consistent, equitable guide to use in resolving common and extraordinary questions and situations occurring during a round of golf.

While analyzing all the Rules (and the Decisions affecting each), he offers the reader identifiable situational examples to help define and dissect the sometimes hard-to-understand rationale of a ruling.  Certainly, his years of on-site experience as an official at scores of tournaments and championships, affords a knowledgeable perspective.

The author tackles some of the more renowned, unfortunate, and costly rules infractions by major winners Rory McIlroy, Stewart Cink and Craig Stadler and he provides ample discussion about each. Admirably, Meditz reminds the reader that golf is played without a referee or umpire and that personal honesty, integrity, and sportsmanlike conduct are the essence of its difference from other sports and games.  He urges golfers to adhere to these principles and play by the Rules of Golf.

It must be noted that the Rules of Golf are expected to be significantly revised and simplified in 2019, judging by the list of proposed changes announced a few months ago.  Some of the content of this book will likely be affected, but it still serves as a guide to appreciating the Rules and as an historical document of the state of the game.

"Rain Delay" by Mark E. Squire (Rain Delay Productions, LLC, $19.95) is a collection of anecdotes and reminiscences from twenty-two of golf's most famous and popular players including Jack, Arnie, Gary, Lee, Sir Nick, Freddie, Hale, Bernhard, and the less legendary Gary McCord whose stories are the book's best.

Squire, a veteran professional golf photographer, had access to many of the world's foremost golfers, particularly during weather delays at tournaments when the media is able to spend time with players in dining and locker rooms in a relaxed and informal environment.   Some of their most private recollections are shared here; others he gathered from recorded radio interviews, press conference transcripts, and newspaper and magazine articles.

The book sheds light on each player's sense of humor and, at times, some deep emotional thoughts about their careers, fellow competitors, and the impact of their greatest victories and defeats.  One standout is the final chapter featuring Miller Barber, a five-time Senior Tour major winner who started a record 1,297 events on the PGA and Champions Tours.  His comments are a testament to why he was one of golf's most likeable and quotable personalities among players, fans and the media.