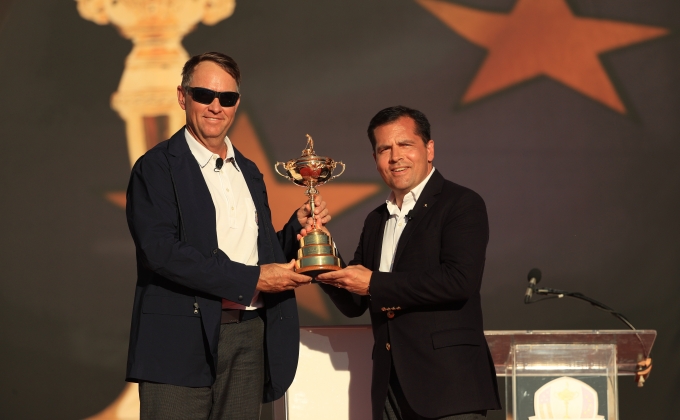 An expanded version of the Q & A with Derek Sprague, from the August/September 2017 Met Golfer, part of the Rolex Road to the Majors Series Presented by Rolex.

Road to the Majors Home

Derek Sprague is the managing director of Liberty National Golf Club in Jersey City and honorary president of the PGA of America after serving as its president from 2014-2016. During his tenure, he co-chaired the highly successful Ryder Cup Task Force and was instrumental in growing the game through player development and youth programs such as PGA Junior League Golf and the Drive, Chip & Putt. Previously, Sprague was the general manager and director of golf at Malone Golf Club, his hometown course in upstate New York, for 27 years.

Q:  What does being Liberty National’s managing director entail and can you explain the club’s relationship with the PGA Tour?

A: The Fireman family hired the PGA Tour to manage the property for them, which makes sense in that back in 2004 they entered into a 25-year contract to host championships here. It was a natural fit. The Tour manages a number of properties around the country and said, “Why don’t we manage the club for you and it will be seamless?’”

Q: Is there an advantage in being a PGA professional in your role?

A: Absolutely. This is a golf club here, strictly golf. That’s why our members joined joined, to play championship golf day in and day out. We have five other PGA professionals here beside me. We’re teaching and growing the game and doing all the programs like PGA Junior League. It’s been fun.

Q: How involved are you in this year’s Presidents Cup? How are preparations coming along?

A: Very well. I interact with the operations team for the PGA Tour and the company, Shaffer Sports, is on site. They’re building a lot of the hospitality areas so I interact with them on a daily basis, checking to make sure they’re on schedule and coordinating any events that we have for our members and guests with them so they have as little impact as possible on the great golf experience we deliver each day.

Q: You took over as PGA President at a tumultuous time, in the wake of the Ted Bishop controversy and with the Ryder Cup loss still stinging. How did you set about calming down the situation and what were your immediate goals?

Q: How rewarding was your role as co-chair of the Ryder Cup task force?

A: That was probably one of my most profound moments as president. There was no place to go but up. You look at our record. We were 2-8 [in the last ten] at the time. It was really just sitting down with the best players in the world and asking, “What would you like to see? What can we do to help you? What can we do to build a program?”

That’s really the angle we took. We started in December of 2014 and just worked from that point on. So when they got to [Hazeltine], it was almost everything just fell into place. Tom Lehman came to me the first night and said, “Derek, can you feel it?” I said, “Yeah.” He said, “These guys are psyched. They know what to expect this week. They’re prepared, better than they’ve ever been prepared because they’ve been talking about it.” They were just ready to roll and they did.

Q: What was it like for you seeing it culminate in an American victory?

A: It was exciting. It was an all-the-hard-work-paid-off moment. When you see a plan well-executed, it’s very gratifying.

Q: Is there anything from your Ryder Cup experience that you can apply to the Presidents Cup or are two separate events?

A: It’s two separate events but certainly my role here as the Managing Director is to make sure the Liberty National team is prepared. We’ve continued to prepare in earnest with scheduled events and assignments for our staff. Hopefully we can execute it as well as we did the Ryder Cup.

Q: Growing the game was a common theme during your presidency. How did some of those initiatives come about?

A: The golf industry is very fragmented. There are many players in the golf ecosystem, different associations and organizations, and they’re all sort of running off at different tangents. So we worked with the LPGA, the PGA Tour, Augusta National, the USGA and then Steve Mona of the World Golf Foundation was the coordinator in getting these organizations together.

We said, “O.K., we know we need more golfers in this country and we need to keep the pipeline full of future golfers. What are the programs that are working out there?” You had the First Tee, the LPGA*USGA Girls Golf, the PGA Junior League and Drive, Chip & Putt. Then you had Get Golf Ready, which is sort of the adult development program. All those organizations agreed that these are the five we’re going to promote together. Instead of everyone just promoting their own growth of the game program we said, let’s cross-promote. That really helped us get focused on growing the game as an industry rather than an association.

Drive, Chip & Putt was put together before that with Augusta National, the PGA of America, and the USGA. Our golf professionals did all the execution on the ground with all the qualifiers, the USGA helped with all the registration process and of course, Augusta National hosted the national finals. The programs have been working. There’s been a pretty good uptick since 2010. We have about 600,000 more juniors playing the game today.

Q: Do you see a brighter future for golf than some of the dire predictions?

A: I think there’s been a natural correction in golf with some closures over the last few years, but that’s like any industry. If you’re not continuing to grow your industry or sport on a regular, sustained basis, you may hit some challenging times. In golf, we had a slowdown but I am optimistic about the future of the game. The correction is going to be beneficial to the game.

My mother always told me that the golf course was the safest playground in America. I wasn’t on the basketball court or the football field as a kid. I lived on the golf course and my mother sent me across the street and she didn’t have to worry about me. That still holds true today in many regards. You can have kids go to the golf course and they’re in a pretty safe environment, not only physically but mentally. What a great place to grow up.

Q: Liberty National is a long way from Malone Golf Club? What are your best memories of Malone and how did your time there shape your career?

A: I was just back up there. I grew up on the first hole of the East golf course. There was only one 18-hole course when I grew up. We expanded to 36 holes in 1985. It was a busy club. We did 50,000 rounds of golf a year up there. When you look over the years I was there – I took over in ’89 but I’d worked there since ’82 -- that’s over 1 million golfers who played that course. So we were growing the game there all throughout the years and it’s very gratifying that I had a hand in shaping basically a quarter century of history at Malone Golf Club and I saw it go right through its expansion. It worked out well for the whole Malone community, not just the club. It was very beneficial to small community like Malone. Bringing in that many tourists really helped out the economy for many years.