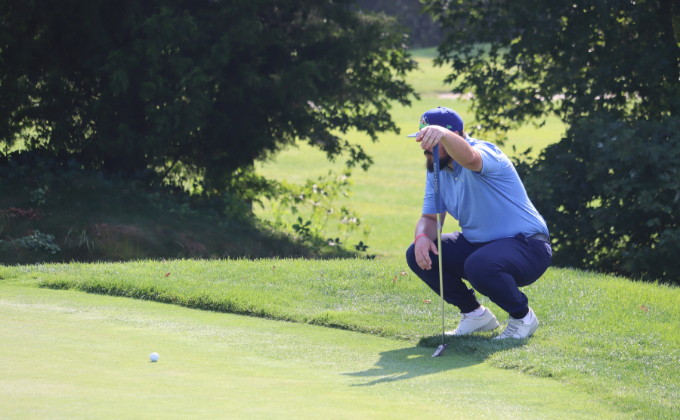 HEWLETT, N.Y. (September 15, 2021) – Jeremy Quinn of MGA eClub-Long Island outlasted Garret Engel of Old Westbury and Jack St. Clair of Sands Point Wednesday to claim the 2021 Long Island Mid-Amateur Championship presented by Gallagher Risk Management Services at The Seawane Club. Quinn, a St. John's graduate, shot a 3-under 69 in round one and followed that up on Wednesday with an even-par 72 to claim the trophy by a narrow margin of one stroke.

"The wind was really up today and you had to grind just to make pars," said Quinn. "I've played here a lot but this was as windy as i've seen it in a while. When it plays like this, anyone who knows Seawane knows that it's very tough."

In round two, Quinn was paired with round one leader Engel, who won the 119th Met Amateur Championship at Plainfield earlier this year and grew up playing at Seawane. After nearly losing his lead thanks to a double bogey on 16, Quinn kept his composure with back-to-back clutch pars to finish off the day..

"I caught a bad break on 16 and had a rock in between my ball in the bunker," said Quinn. "I probably should have moved it, but I was able to recover and make some big par saves. I would say the one thing I had going all day was my putter. I made a lot of key putts to keep my round going in the right direction."

At the completion of Tuesday's round, Engel was up one stroke on Quinn and Quinn was able to do just enough in round two, edging out Engel by two strokes in order to take home the trophy. The two went to the 18th tee tied at 3-under, with St. Clair in the clubhouse at 2-under. Engel's tee shot was pulled left, near the out of bounds stakes. Quinn fired his right into the first fairway, but was able to stick his second shot to within 20-feet of the flag.

"This is the first win i've had since 2012," said Quinn. "I was definitely feeling some nerves down the stretch, but that second shot on 18 was great to be able to hold the green and give myself a manageable two-putt for the win. I didn't know until I was on the tee on 18 that I was tied with Garett so there was a lot riding on every shot on that hole."

St. Clair also made a strong run at the trophy in Wednesday's round, shooting a 2-under-72. At one point he was 5-under for the round, but faltered in the closing stretch with the conditions getting tougher as the aftertoon went on. St. Clair took home second with his strong final round.

The win is Quinn's first in an LIGA event. The former pro regained amateur status last year and is competing in his first full season of LIGA events.