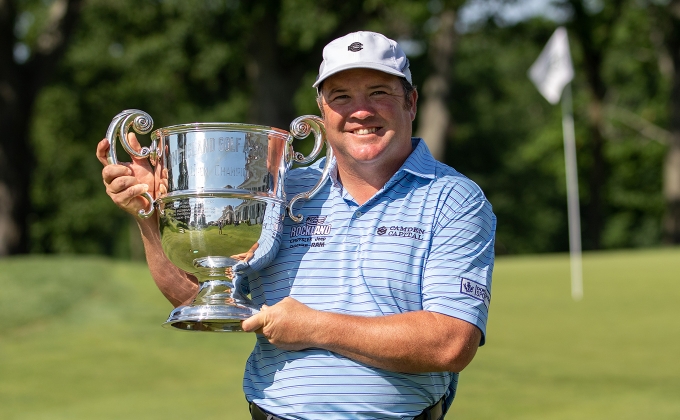 LAKE SUCCESS, N.Y. (June 10, 2021) – Andrew Svoboda of Engineers won the Long Island Open Championship Presented by Stifel for the third time in four years, Thursday, but the victory didn’t come without plenty of challenge, as Svoboda outlasted amateur Darin Goldstein of Deepdale in a three-hole aggregate playoff at Fresh Meadow Country Club after the pair finished the 54-hole event at 9-under par.

Svoboda needed a clutch birdie on the 18th hole just to match Goldstein, who put the pressure on with a closing birdie-birdie-birdie finish to post his 3-under 67 final round and an overall 9-under score.

“I hit probably the greatest gap wedge of my life to four feet,” said Svoboda, describing a 117-yard approach from the left fairway bunker. To add to the difficulty, the ball sat below his feet. But, Svoboda cozied the ball to four feet and forced the playoff.

“Luckily that putt was so fast, I just had to get it going,” said Svoboda of the putt that locked up his 2-under 68 final round. “It was pretty straight, it didn’t break, so I was fortunate to make that putt.”

Svoboda opened the playoff with a two-putt par on the par-3 7th, before making birdie on the par-4 8th to go two shots up on Goldstein, who opened with a pair of fours. Though Svoboda’s approach on the par-4 9th fell short in the bunker and his next barely made it out of the bunker, his fourth finished inches from the hole. Goldstein had slippery downhill look at birdie to force sudden-death, but the putt slid left and led Svoboda to capturing his third Long Island Open title.

Svoboda's first win came in dominating fashion at Nassau Country Club in 2018. In 2019, he defended his title, also having a flair for dramatics with a birdie on the 54th hole and coming out on top in a three-hole aggregate playoff.

“Honestly, I haven’t played that well this year on the Korn Ferry [Tour] and I haven’t really played in anything local,” said Svoboda about his season so far. “But, I just love this event. I love Fresh Meadow, this is really an amazing venue.”

Svoboda was battling with host professional Danny Balin for much of the day. Balin came out on fire, making the turn in 4-under 31 to grab a two-shot lead over Goldstein with nine to play. Svoboda, meanwhile, made double-bogey on the par-3 7th after coming up short in the greenside bunker and then three putting. He birdied the par-4 9th and trailed Balin by three heading to the final nine.

“The back nine got tough,” said Svoboda of the conditions. “The wind really picked up and it was hard.”

While Balin made birdie on the par-5 10th, he three putted three of the next four holes, playing them in 5-over to relinquish his lead.

Svoboda started the back nine bogey-birdie, but then strung together six consecutive pars before his clutch finishing birdie. Balin also gave himself a shot on the closing hole after making birdie on the par-4 17th, but the uphill, sliding eight-footer horseshoed around the hole to keep him out of the playoff.

The trio had separated themselves from the field, with Josh Goldenberg of Atlantic and Jay Card of Gardiner’s Bay finishing fourth and fifth at 4- and 3-under, respectively. Matt Dobyns of Meadow Brook finished sixth at 2-under, while Dylan Crowley of Glen Cove, Timothy Rosenhouse of Engineers, Tristin Goodwin of Rockaway Hunting Club, amateur Dan Abbondandolo of Brookville and Matt Lowe of Bethpage all finished at 1-under.