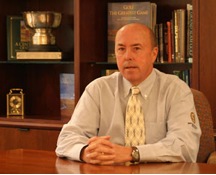 Elmsford, NY-Charles L. Robson, Executive Director of the Metropolitan Section of the PGA since 1972, and a member of the Garden City Golf Club, was honored with the Association’s highest honor, the Distinguished Service Award, at the 106th Annual Meeting and Dinner on Wednesday, December 3rd, at Westchester Country Club in Harrison, NY.

The DSA is presented annually to a candidate who has contributed "...distinguished service to golf and its related activities, consistent with the valued standards and honorable traditions of the game.”  For all of his professional career, Charlie Robson has been a champion of the working club professional, and one of the few individuals employed in golf whose contributions go so far above and beyond what is required of his job that he is widely regarded as one of the true servants of the game.   He will join the company of an impressive list of past winners, including Joseph C. Dey, Fred Corcoran, and P.J. Boatwright, all of whom served golf in an official capacity.

Raised on Long Island, where he now lives, Charlie Robson began his career with the Metropolitan PGA in 1972, after a brief stint as golf professional at Plandome Country Club.  He immediately began working to establish hiring guidelines for clubs to help insure better job security for the club professional, as well as better benefits and compensation packages. With fairness, patience and good business sense, he helped to guide a fledgling Association of 250 members to a powerful organization of over 700 members with an annual budget of  $3 million.  More importantly, he has been the driving force in establishing the Metropolitan PGA as one of the most respected PGA sections in the country.

Charlie also expanded the section’s tournament schedule to over 125 days of competition annually with purses in excess of  $100,000, including the prestigious New York State Open, the Metropolitan PGA Championship, the Women’s Metropolitan Open, Treiber Memorial, and Met PGA Head Professional Championship, to name a few.  He also started the Met PGA Merchandise Show to further promote relationships between sales representatives, manufacturers, and the club professionals.

Perhaps his greatest contributions, however, have come in the area of junior golf.  He established the Met PGA Junior Golf Association and Junior Tour, now one of the foremost junior programs in the country, and in 1988, began the ‘Golf In Schools’ program, which served as a model for many other inner-city programs across the nation.  He was also deeply involved in bringing the First Tee of Metropolitan New York to the Mosholu Golf Course in 2001.

Suburban Golf’s “Man of the Year” in 1991 and recipient of the Met Golf Course Superintendents   John Reid Award in 1998, Charlie was recently named one of Newsday’s Top Ten Most Influential People in Golf.  All fitting honors, as few people in the history of the Met Area have had such a lasting impact on the game, and the MGA was proud to present Charles L. Robson with the 2003 Distinguished Service Award.

Other items of business at the Annual Meeting included the election of officers and the presentation of the Association’s Player of the Year Award.