The Golfing Union of Ireland earned 5 ½  points in today’s singles matches to win the Carey Cup matches by a score of 11 to 5. The MGA team looked 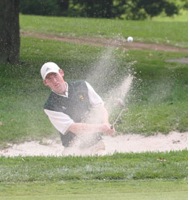 as if it might rally back from yesterday’s 3-point deficit, as team captain Allan Small defeated European Amateur Champion Brian McElhinney, 1 up, in a match that McElhinney never led.  In the second match, Peter Meurer, one down to Mark O’Sullivan on the 18th, stuck his approach to a foot while O’Sullivan’s approach found the greenside bunker.  O’Sullivan, who sunk a 50-foot putt on the 18th to square his match yesterday, holed his bunker shot to birdie the hole and earn the Irish their first point of the day.  Pat Pierson trailed for all but the first two holes of his match against Darren Crowe on the way to his 3 & 2 loss.  MGA team and Quaker Ridge member Peter Zurkow made four birdies as he rallied back from a two hole deficit to defeat Mark Campbell, 2 up. 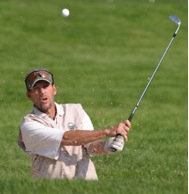 In the second half of the matches, the MGA’s Adam Fuchs never led against Michael McGeady, and settled for a one down loss when his 15-foot birdie putt barely missed the cup on the 18th.  Although MGA’s Mark Thompson and GUI’s Clancy Bowe were even through nine holes, Bowe won the next three holes on the way to his 3 & 2 victory.  In the day’s penultimate match, the MGA’s youngest team member Michael Quagliano, 17, birdied the first hole to take an early lead against the GUI’s oldest team member Johnny Foster, 27.  But Foster took control with birdies on the 8th and 11th and won the match 4 & 3.  The MGA’s Andrew Svoboda never led in his match against Niall Turner, but won the final hole with a par 4, to earn the MGA a final half point

The Carey Cup Matches were inaugurated in 1996 by former New York State  Governor  Hugh L. Carey to foster sportsmanship and goodwill between 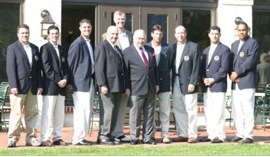 the two countries.  The matches alternate bi-annually between the Met Area and Ireland and feature the top eight male golfers from both sides in a  two-day Walker Cup-style competition.