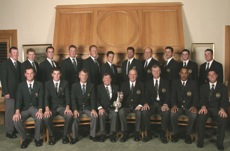 Elmsford, N.Y. (March 23, 2005) - The Metropolitan Golf Association has announced the members of their eight-man amateur team which will compete against a similar team from the Golfing Union of Ireland in the 6th Governor Hugh L. Carey Challenge Cup Matches at Carton House in Maynooth, Ireland on May 11-12.  The Carey Cup Matches are named for former New York State Governor Hugh L. Carey who founded the event as a means of stimulating sportsmanship and goodwill between the two countries.  It was inaugurated in 1996 and played at Hudson National Golf Club in Croton-On-Hudson, NY, and since then has alternated between the two countries bi-annually.

Leading the MGA team will be veterans Peter Meurer, 47, of Silver Lake, the 2004 MGA Player of the Year, and Allan Small, 53, of Fairmount, the reigning 2004 New Jersey State Amateur Champion, each a six time International Team member. They’ll be joined by by Michael Reardon, 43, of Tuxedo, the 2004 Westchester Amateur Champion, 2003 Met Amateur Champion and 2004 Long Island Amateur Champion Mike Stamberger, 33, of Plainfield,  Sean Hartman, 40, of Indian Hills,  and Tom Yellin, 52, of the Stanwich Club who all played on the 2004 team that competed against the Ligue de Paris at Plainfield.  Rounding out the team is Patrick Pierson, 41, of Miniscieongo,  the 2003 NY State Mid-Amateur Champion  and member of the 2003 Carey Cup Team, and newcomer Craig Smith, 23, of Fairmount, who earned a top 10 finish on the 2004 MGA Player of the Year Honor Roll.

The Golfing Union of Ireland has not announced their team yet, but is expected to field their traditionally powerful squad of young players, representing some of Ireland’s top amateurs.

The Carey Cup is similar in format to the Walker Cup and consists of Fourball, Foursome, and Singles matches over two days.  The MGA captured the inaugural Cup in 1996, but the GUI has won the last four renewals, in 1998 at the new Links at Portmarnock outside Dublin, in 1999 at the Maidstone Club in East Hampton, NY, in 2001 at Portmarnock Golf Club and at Quaker Ridge Golf Club in 2003.  Two previous competitions between the two teams, in 1990 at Metedeconk National Golf Club in Jackson, NJ and at the Waterville Links in Ireland in 1991, were split.

In conjunction with this event, the MGA and its charitable Foundation, and former Governor Hugh L. Carey,  host a very special Am-Am competition prior to the start of the Matches.  This event pairs three amateurs with each of the official team members in a best ball competition and is conducted on the same course as the official Matches.  The day provides a unique opportunity to meet and play with some of the best amateur golfers on both sides of the Atlantic, including many national and international champions. The Am-Am will benefit the MGA Foundation’s junior golf and educational programs.  Spots in the Am-Am are available for a $500 donation to the MGA Foundation and can be reserved by calling Kate Keller at 914-347-4653 or e-mail  kkeller@mgagolf.org.

Carton House is the home of two internationally acclaimed new golf courses, The Montgomerie  and The O’Meara, which are located on the historic 1,100-acre estate of Carton Demesne, in Maynooth, only 14 miles from Dublin.  In addition to the Carey Cup, the Carton House will host The Irish Amateur Open Championship on The O'Meara course and The Nissan Irish Open on The Montgomerie course during the weeks immediately before and after the Carey Cup.

The Carey Cup Matches are open to the public and free of charge. For more information,  contact Jeanne McCooey, or Kate Keller at the MGA (914)347-4653