Bensel, 39, earned $27,500 out of the $150,000 purse for his first MGA victory and his first title since the 2006 Westchester PGA Championship. He began the day at four-under 138, one stroke back of co-leaders Rittberger and Charlie Meola of Fairview (Conn.). By the time the final group made the turn, there was a logjam at the top of the leaderboard, with as many as four players tied at five-under-par, including Frank Esposito of Brooklake and Herman, who finished in third place last year.

“This one is the largest purse of any major tournament in the area, and it’s such an amazing field, so it feels great,” said Bensel. “Definitely something I’ve always looked forward to is winning the Met Open.”

It wasn’t an easy march to victory for Bensel. First-round leader Rick Hartmann began the day three strokes back in a tie for 13th, but he turned up the heat on the players when he fired a 68 to reach the clubhouse at five-under 208. The players on the course knew it would take at least one more birdie coming in to pull ahead.

Esposito, who had the lead for a portion of the final round, fell back to three-under with bogeys at the 12th, 13th and 15th holes. The first co-leader to come to the par-three 18th hole with a chance to break the tie at five-under was 2003 Met Open champion Andrew Svoboda, who missed a 30-foot birdie putt to take the outright lead. Next came Jim Herman, who missed a birdie putt of his own, leaving Bensel as the only player on the course who could pass Hartmann.

“I knew on number 14 that I needed a birdie to tie and two to probably win. There are some great players out there, so I was just trying to stay aggressive and keep getting more under par,” said Bensel.

After a bogey at 240-yard, par-three 15th hole, Bensel would have to make up some ground and did so with his birdie on the difficult par-five 17th hole.

“That hole was playing into the wind today, and it’s hard anyway,” said Bensel. “I hit my best drive of the day there, then hit a hybrid club to about 90 yards. I hit a gap wedge from there to about four feet and rolled it in.”

Tied for the lead at the 18th tee, Bensel hit a 7-iron to 12 feet beyond the hole and was faced with a tricky downhill putt for the win. “I had to be careful on the speed there. I didn’t want to be too aggressive and knock it too far by, because at worst I wanted to make it into a playoff.” He calmly sunk the putt in front of an appreciative gallery.

In addition to the four-way tie for second place between Hartmann, Svoboda, Herman and second-round co-leader Bob Rittberger, there was a three-way tie for low amateur honors. Kevin Foley of Neshanic Valley, who won low amateur last year in the Met Open at Canoe Brook, finished at two-over 215 along with Andrew Giuliani of Van Cortlandt Park and Michael Dominici of Oak Hill. Defending champion John Guyton finished in a tie for 26th at three-over 216.

The low round of the day, a four-under 67, was shot by Gregory Baker of Rockaway River. The most talked-about round of the day was the 69 shot by Chris Case of The Creek Club, who had a seven-under 29 on his incoming nine. 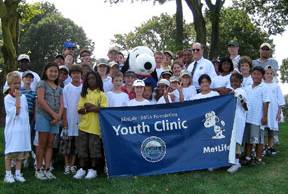 Today’s final round at the beautiful Meadow Brook Club wasn’t only about competitive golf. The MGA conducted a MGA/MetLife Junior Clinic featuring 40 youngsters from the First Tee of Nassau County at Eisenhower Park. Popular mascot Snoopy entertained the children, and Meadow Brook assistant professional Jamie Kilmer gave them some tips to improve their games.