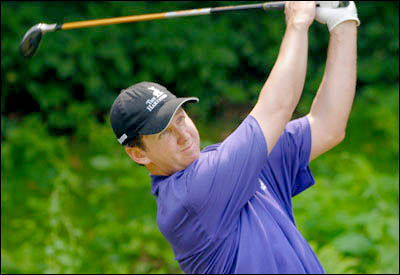 CROMWELL, Conn. (June 18, 2008) – Back in the Hartford area to compete in his home state PGA Tour event, Fairfield native J.J. Henry has more than just golf to talk about. One day before the start of The Travelers Championship that he won just two years ago, Henry announced plans for his charitable foundation to make a difference to children all over Connecticut.

Executives from The First Tee of Connecticut, which is a partner of the Metropolitan Golf Association and the Met PGA at The First Tee of Bridgeport at Fairchild Wheeler Golf Course, were on-site at The Travelers Championship to participate in The Henry House Foundation’s partnership to help execute long-term projects for The First Tee chapters in Connecticut.

“Our mission specifically drives us to fund tangible projects in these communities for the kids, and that is exactly what this commitment will do,” Henry said.  Henry, a 2006 U.S. Ryder Cup team member, was runner-up in the 1994 Met Amateur and played on a number of MGA international teams. He has long had an active involvement in Met Area charities and participated in a “Breakfast with J.J. Henry” program last summer at Fairchild Wheeler Golf Course in Bridgeport.

“We not only strongly believe in this program, but we are going to become a working part of it as well,” Henry says. There will be numerous components to the commitment, which is slated to last a minimum of three years, including a guaranteed minimum cash donation to fund aspects of the new The First Tee of Connecticut Facility at TPC River Highlands.

Bruce Wilson, President and CEO of The First Tee of Connecticut, is looking forward to the growth potential of this partnership. “Aside from the outstanding financial commitment the Henry House Foundation is making, we anticipate great success with the time component J.J. Henry has so graciously committed. We are working with the Foundation to plan events that will greatly benefit the children of Connecticut,” Wilson said.

The Henry House Foundation began when J.J. Henry and his wife envisioned an organization that served to better the healthcare and well-being of children in their hometown of Fort Worth, Texas, as well as the Connecticut community in which Henry was raised.

“I have been fortunate to have experienced great success in my career,” said Henry. “The people of Southern New England have been encouraging and supportive of my career path and it is with great appreciation that the Henry House Foundation returns those gifts of support and encouragement to them through their best resource ― the children.”

For more information on The First Tee, contact Jeanne McCooey at the Metropolitan Golf Association at 914-347-4653.