ELMSFORD, N.Y. (June 5, 2008) – The 2008 MGA season continues on Monday, June 9 with the rescheduled 16th MGA Senior Net Four-Ball Tournament at Lawrence Village Country Club in Lawrence, N.Y. The event, originally scheduled for May 12, was moved to June 9 due to heavy rains and wet course conditions. 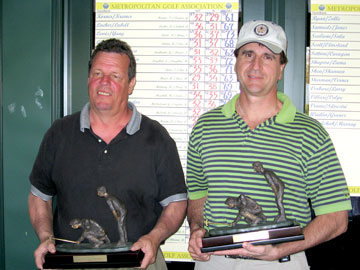 A total of 86 two-man teams from golf clubs and courses across the Met Area will compete in the one-day event, played in an 18-hole, better-ball format. Despite the change in date, last year’s champions Rick Baris and Bill Ludwig of Packanack Golf Club in Wayne, New Jersey will be on hand to defend their title. Two other former champions are also in the field: Andrew Foppiano of Shore View (2004) will team up with Jack Fagan, while Peter Rubeo of Mohansic (2002) will partner with Richard Abramo (the Senior Net was an individual competition prior to 2006).

Lawrence Village Country Club last hosted the MGA Senior Net in 2000. The course, which is owned by the Nassau County town of Lawrence, New York, is an enjoyable Devereux Emmet design dating back to 1924. Its location just two miles from the Atlantic Ocean ensures that steady breezes will impact players as they vie to take home the top prize in one of the MGA’s most popular events.

The Senior Net, which began in 1993 as an individual event and switched to a team format in 2006, draws players who have reached their 50th birthday and who hold a current USGA Handicap Index not exceeding 18.0. Teammates do not have to be from the same club. Prizes are awarded to the top four finishers in the net score category and the top finisher in the gross score category. In the event’s history, there has never been a two-time winner of the low net category.