MOUNT KISCO, N.Y. (June 26, 2008) – With an impressive 12-under 59, the Mohansic team of Richard Abramo and Peter Rubeo captured the 32nd MGA/MetLife Men’s Net Team title at Mount Kisco Country Club in Mount Kisco, N.Y. Today’s play saw plenty of impressive rounds across the leaderboard, but none in the field of 48 teams could match Abramo and Rubeo, even despite their slow start. 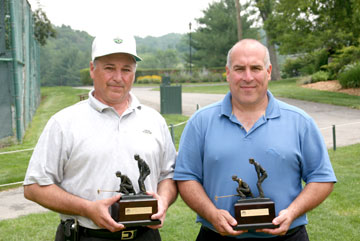 “We started off horrible, we started off two over par after two holes,” said Rubeo. “Then we were able to sink a few birdie putts and pick up six shots in three holes (1, 2 and 3).” That three-hole run would be critical in eclipsing the Panther Valley team of Bruce and Neil Haskell, whose 11-under 60 would find them a stroke short of the title. The Tuxedo tandem of Ron Littlehale and Kurt Grimmelmann placed third with a 10-under 61.

Today’s win marks Peter Rubeo’s fourth career victory in the MGA/MetLife Men’s Net Team Championship, his first with partner Richard Abramo. Rubeo and former partner John Stelluti had a three-peat in this event from 1994 through 1996. Both Rubeo and Abramo are retired Westchester County police offers who spend plenty of free time together on the golf course. Last year’s Net Team champions, Thomas Taylor Sr. and Lou Malaussena of Port Jefferson, finished tied for 11th with a seven-under 64.

More than 2,000 two-man teams from across the Met Area attempted to qualify at the club level for the right to represent their club at one of three Sectional Qualifying rounds, held on June 3 at Salem Golf Club in Salem, N.Y., June 4 at Olde Vine Golf Club in Riverhead, N.Y., and on June 11 at Apple Ridge Country Club in Mahwah, N.J. The qualifiers from those three sites then advanced to the championship at Mount Kisco. Each team member must have a USGA Handicap Index between 5.0 and 24.0, with the team total not exceeding 40.0. The format for the tournament is 18 holes of  stroke play, net better-ball against the field, with players competing at 90 percent of their Course Handicap.