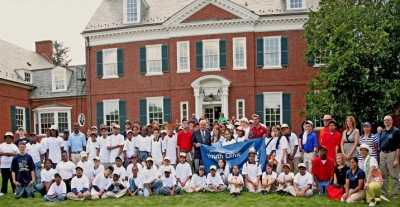 As part of the day’s festivities, students were treated to a tour of the USGA’s Equipment Testing Center and were among the first guests to have a guided tour of the spectacular new USGA Museum and Arnold Palmer Center for Golf History. The building, which houses some of the world’s most valuable and treasured golf memorabilia and artifacts, is home to the trophies of all 13 USGA championships, the club used by Alan Shepard for his “moon shot,” and the irons used by Francis Oiumet to win the 1913 U.S. Open.

After a brief film on the life of Arnold Palmer, the First Tee youngsters had a rare opportunity to meet with the legendary golfer and pose for a treasured photograph with one of the greatest players of all time.

The MGA/Met Life clinics are part of a joint diversity initiative with MetLife, whose partnership with the MGA dates back to 1980 and is one of the longest-running sponsorships in sports. MetLife also sponsors eight MGA championships including the Met Junior, the oldest junior championship in the nation.